Lydia's second non-favorite subject is handwriting.  She doesn't like to practice.  But she loves to draw.  So I hung this AquaDoodle in the hallway for her to draw and practice her handwriting on.  She has moved one of her chairs into the hall to sit on, and then she discovered she could trace not only her hand...but her foot.  Well then Caty saw that she could do that also! 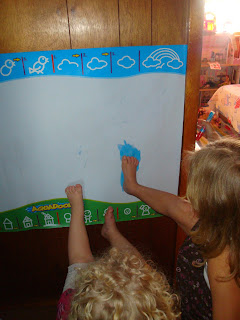 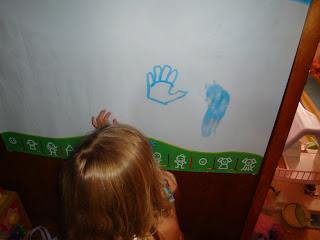 I saw this on another website and heard about it from one of the boy's preschool teachers a few years ago.  I let her practice writing in shave cream.  She didn't really care for it though.  I assume it's because it wasn't chocolate...but the smell isn't great either.  It kept her busy until she realized how much she didn't like the smell. 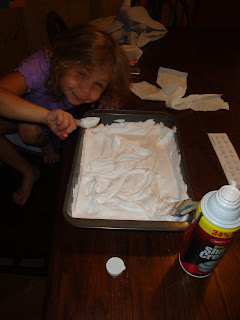 She had an "eraser" which was a small paint brush to erase her letters each time and smooth out the cream.  Her Handwriting Without Tears curriculum included some sample templates that can be put on a desk.  I just layed it next to the pan she was working in to use as a guide.  Maybe next week we will try just paint in a baggie or even shave cream in a baggie.  She won't smell it and it won't be as messy.
Posted by MommyKuehner at 5:11 PM