Our passport stamp...for some reason I can't get the picture to turn right. (Sorry) 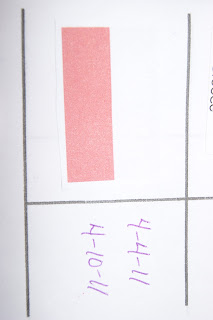 ﻿This is some of what we learned:
COUNTRY:  Poland
CAPITAL:  Warsaw
WEATHER:  Very similar to ours.  They are a bit cooler in the summer than we are.  Average summer temperatures are 68-75 degrees.
GEOGRAPHY:  Flat and fertile plain.  Polish lowlands are good for growing crops
POPULATION:  39,120,000
CURRENCY:  Polish złoty
LANGUAGE:  Polish
GOVERNMENT:  Parliamentary Republic
NATURAL RESOURCES:  Poland is a country rich in minerals. It is among the world's biggest producers of hard and brown coal, copper, zinc, lead, sulphur, rock salt and construction minerals.
AGRICULTURE:  The most important crops were grains, of which the highest yields came from wheat, rye, barley, and oats. Other major crops were potatoes, sugar beets, fodder crops, flax, hops, tobacco, and fruits.
Some animals we learned about are the White Stork, White Tailed Eagle, the European Lynx, the European Bison, the Corncrake and European Beaver.  (Can you tell that Poland is in Europe?!?!)
We also learned a bit about the Polish art of Wycinanki (vee-chee-nan-kee) which is the art form of papercutting.
We cheated a bit and used old greeting cards and scrapbooking stamps to create our art. 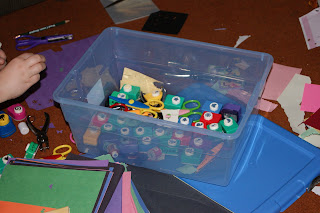 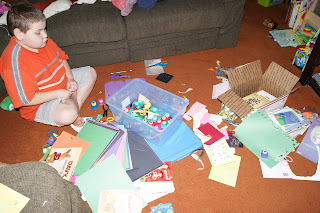 I bought a huge lot of old greeting cards on Ebay several months ago.  Brayden (my most uncreative child) cut apart (with help) a greeting card and glued it down.  The kids were having problems with the little stamps, so I helped them make the cutouts.  Then they choose what they wanted on their paper. 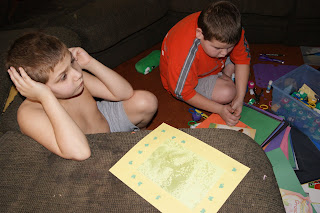 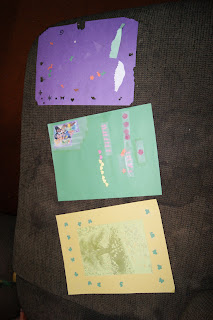 We also talked briefly about the tradition of Spring in Poland.  It's the burning of a Marzanna doll.  They make a corn husk type doll and then burn it to get rid of Winter Marzanna and they yell "Welcome Spring".  The belief is the old Marzanna needs to be rid of to allow the Spring season to begin.  We were going to make a doll for spring, but time got away from us.
Posted by MommyKuehner at 9:01 PM