I had the opportunity to hear Temple Grandin in person today at the Bowling Green State University Autism Summit.  I have seen the HBO movie and read some of her books.  Read about how wonderful she is.

As a parent of children with Autism, here is a shining example that therapy can make a huge difference in someone's life.  This is an example of a child who was non-vocal and now is a public speaker and holds down a great job!

I have to admit that I went in a bit skeptical.  After sitting for an hour listening to the importance of educators (not homeschoolers, but school districts) taking advantage of all the state had to offer (and not once talking about parental support), I was very skeptical if the $60.00 I spent on the ticket was really worth it.  I did find out about one or two websites that I may use though, so the hour wasn't a complete wash.  Then it was time for Ms. Grandin to take stage.  I stood applauding like all the other 500 attendees, and thought maybe this won't be so bad.  But it kind of went downhill from there.

I am the type that gets completely frustrated when people push diet cures or anything cures at me constantly claiming that they will cure the boys!  I personally do not think that Jenny McCarthy should write about an autism cure.  There is NO CURE for autism!!!  If a child is cured of their autistic symptoms after a diet change, then they were misdiagnosed.  Even the Celiac Website points to Autistic-like symptoms as a side effect of Wheat allergy....notice I said 'Autistic-like' symptoms, not Autism! (I am not trying to start a riot about Jenny McCarthy, I just not a fan of her Autism books.)

When we were really starting down the path of the Journey for the rest of our lives after diagnosis, I'll never forget what the Autism Society said during a Support Group meeting.  If you have met 1 child with autism, then you have met 1 child with autism.  I very much believe that.  Our boys have some similarities in symptoms and habits, but they are each individual.  Ms Grandin was up really pushing her views on medications and types of therapy that benefited her.  Just because they benefited her though, does not mean they will benefit all kids.  She finally said that not all kids would see results the same as her with the techniques that were used for her.  I also had a hard time following her.  Some things did not come out in an order that made sense to me, but that could've just been me!

Now for the things I did learn: 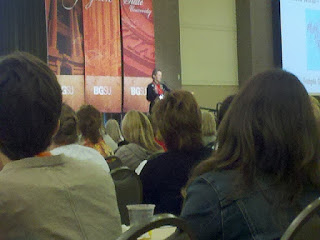 There was a large amount of people there, about 400-500 people.  I was way in the corner, my new phone has a zoom feature.  That was the only way I got this much of a picture.  I will continue to read her books, but don't think I will see her in person again.  She really is an inspiration as to how a person with high-functioning autism can grow into a successful individual.    (I still keep reminding myself though that not everyone will respond to treatment in the same way.)

Posted by MommyKuehner at 10:43 PM