Our weekly triumph and accomplishments

Well we are in Tennessee this week and next.  And we still are chugging away, since the school year is almost over.  We still have work that I would like us to accomplish.

Lydia and Joey have started a Spectrum Reading Comprehension Little Critter Book for their levels.  Lydia is working in Grade 1 and was so proud of herself when she realized that she could read the little story almost completely by herself!!!

Joey is working on the 2nd grade of this book, because even though he excels in reading skills.  Basic comprehension skills still lack.  So this is a big help to him.

Joey finished his Teaching Textbooks level before we left, so he is practicing basic math facts including finally memorizing his multiplication tables  I brought this Montessori board for him to use to have a very visual tool for learning the facts.

We are working our way through the Oceans Habitats lapbook from Hands of a Child.

We also are reading lots and lots of books both fiction and non-fiction on oceans.  We watched Disney Oceans and the DK Oceans movie also.

This project will be our family project for our upcoming Homeschool Expo.  Since we are going to the ocean next Friday, I thought that would be the perfect ending for that unit.  We are hoping to get some pretty cool shells for our project display.

Both Joey and Lydia are working the Focus on Photography Project book from 4H.  We don't actually belong to any clubs, but I thought the books were pretty cool.  So I ordered them and we are working our way through Book 1 right now.  I was able to get a nice digital camera for the kids pretty cheap from a local online sale group that they are using.  It's not top of the line, but they are not using my new camera!!!!..lol!!! 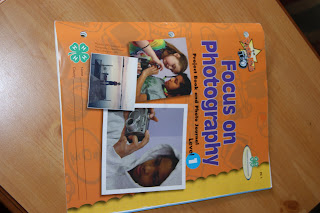 Caty is working on the Letter M this week with Explore the Code.  Erica at Confessions of a Homeschooler has a great Letter of the Week program that we bought and I use those printables along with her Explore the Code. 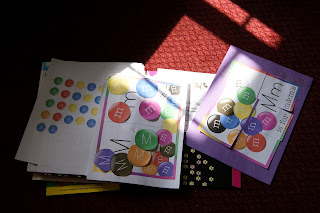 Caty is also really picking up on her math.  We bought her the Team Umi Zoomi Math sets a few months ago, and now out of the blue...it's clicking.  She is loving math and we are flying through the books.  So she may be starting MUS Primer possibly in the fall.

Last week Lydia started a new Grammar book.  Since she is really starting to take off in phonics and reading, I thought it was time to get started.  I found this book at a second hand store for only $5.00!!!  I was soooo excited!!!

She is getting the idea of common and proper nouns already and has memorized her first poem.

Joey is also working on Inferences and how to read what a story is really saying.  We are using Inference Jones,  It's a great book!!!

Postcards....postcards...postcards....the kids are working on postcards.  I am showing them how to address and write short messages.  Unfortunately everything is in my handwriting because the kids is illegible and they write huge!!!  So not very postcard friendly...lol.  The kids are pretty excited though about sending them.

But we did bring their handwriting folders and they are practicing daily.  We are using Getty Dubay series that was recommended by a friend.  So far all three of the older kids are doing great using this.  Caty is working on writing slowly, so she is working a lot more slowly on the worksheets.

Brayden is continuing Reading Eggs and has started practicing his math facts.  I have been slowly encouraging him a little here and there.  He's finally doing more work.  We have been having such problems with him lately.  He is reading books, as long as they are on his iPad.  And he finally will do science again.  Before he would just sit around and stare at the walls and would not respond.  So we must be making some progress somewhere

In History, we learned about Sir Walter Raleigh and the Lost Colony.  Since we will be in the Outer Banks in another week, and we were already studying Explorers of America it worked out perfectly to emphasize him a bit more since we will be visiting the Lost Colony on Roanoke Island and Fort Raleigh National Park. Joey and Lydia have almost finished the worksheets from their online history lesson.  They can deliver them to the rangers and received a badge that they completed the unit study on the Lost Colony.

This was a great video about Walter Raleigh.  The kids really liked it, and I thought it explained a lot to them.  We also learned a bit about the Spanish Explorers since they were brought up in the English Explorers video so much.

We actually had a very good week.  We were able to accomplish a ton!!!  And had lots and lots of playtime and exploring time.

That has pretty much been our week.  One more week in Tennessee and then we'll be heading to North Carolina for our family vacation in the Outer Banks.  Whoohoo!!!

Posted by MommyKuehner at 10:19 PM