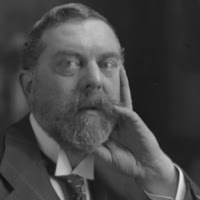 John Singer Sargent was known as the portrait maker of the wealthy.  He was born in Italy, and spent most of his life in Europe.  But he is known as an American artist.  He came from a wealthy family.  He enjoyed traveling around Europe studying art.

He is most famous for his picture Madame X, which also brought a large amount of scandal in his day. The woman was wearing a sleeveless, low-cut dress.  The mother of the woman in the portrait actually asked that it be removed from display.

He moved to England after this scandal, and found that the English were not as welcoming as he thought.  Because of the scandal in Paris, they were not willing to sit for portraits with him....out of fear that their portraits would turn out the same.

Sargent found that Americans were not as picky.  He often painted his subjects as if they were caught in the middle of motion, with faces both highly individualized and expressive.

The turning point for Sargent's career in England came when he showed his Carnation, Lily, Lily, Rose (painted 1885-86) at the London Royal Academy. The piece, undeniably one of Sargent's masterpieces, incorporated Victorian themes and a calculated impressionist influence that depicted two girls lighting lanterns among flowers in spring. The English recognized the painting's greatness, and members of the elite were soon lining up to commission their own likenesses. 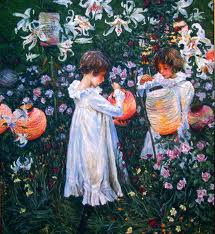 Eventually John Singer Sargent stopped doing portraits because this work took too much time for him to complete.  He started stepping away from portraits in 1903, and focused on other art including a mural at Boston Public Library. 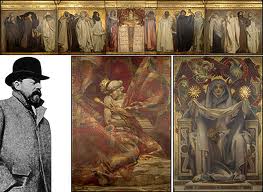 As World War War I began, he began painting the lives of soldiers on the front.  He painted in dark colors.  He also switched to more water colors.

(I gave you quite a bit about his life...more than Lydia wanted to hear..lol)  I found his life very interesting as I read about him.  For our project, Lydia was to use any medium (paint, draw, markers, whatever she chose) to draw her American Girl Doll Julie in a evening gown. 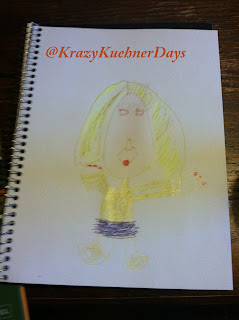 She chose to use her glitter gel pens and sketch pencils.  I think it turned out really well.

We are using this book and other internet resources to study artists the remainder of the year. 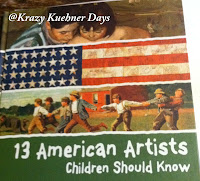 Posted by MommyKuehner at 7:32 AM