I have been doing a bad thing.  I have just been in hiding.  I have been going through the daily motions of life, but deep inside I have been miserable.  It's a misery I get every so often as I watch my children struggle daily with learning disabilities and emotional disabilities that are beyond their control.  Most of the time I can see past and get through, but with the change of the seasons it has been more noticeable lately.  This misery has caused my patience to be shortened and my temper to be more noticeable.  I hate this feeling.  It's the feeling that the stress of daily life is going to swallow me up.  It means more anxiety attacks and health issues as the stress takes its toll on me.

That is one of the reasons I have combined weeks this post.  I didn't get a chance to post last week's work because the blog kept getting pushed to the back burner.  I wasn't totally ignoring it, but it lost priority last week.  We did enjoy daddy being home for a few days.  And we did some shopping for the house with him.  The boys room TV died, and if you are going to have a TV die...Black Friday week is the time for it to happen.  The kids still have old TVs, so we decided to splurge and buy a new one for the girls room also.  It was a great deal.  We ended up buying a new TV for our living room and then putting our living room flat screen in the boys room.

The boys have their own "Boy Cave".  It is decked out now with a 46" flat screen on the wall and another smaller TV.  Each TV has a game system hooked to it.  They have their recliners and a folding futon.  Joey has a desk for building models on.  They have a bird feeder outside their bedroom window....life is good.

In the living room, well I was happy with our purchase.  It's one of those 4K Ultra Tvs.  That meant nothing to me, until Joe showed me how to connect my laptop to the TV for classes!!!  HOW AWESOME!! 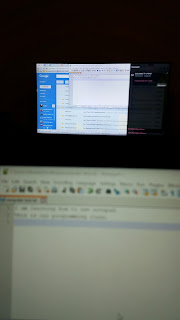 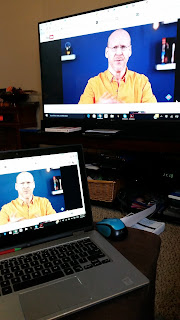 This is great for group classes like computer class.  I just connected my laptop and we went through out computer science class with me showing them on the big screen TV!!  That was great!

I have been working on crocheting a blanket for Miss Caty.  She loves rainbows.  My goal is to crochet a blanket for each of the kids.  I still have the blanket that my mom crocheted for me when I was Lydia's age.  Caty and Lydia use it now.  So I want to make something like that for them.   It's going to take me a while.  I have been working on this one for a year because I took so much time off from it.  So I want to finish it in December.  Then I can start on Joey's. 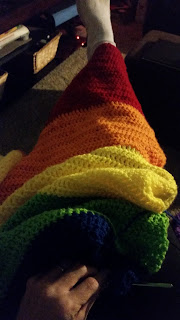 Lydia tried crocheting again, but is struggling with it.  So we are going to attempt a knitting loom with her.

One of the science projects the kids worked on was learning about asteroids, meteors and comets.  We talked a little about the moon's surface and did an experiment about how the craters are made. 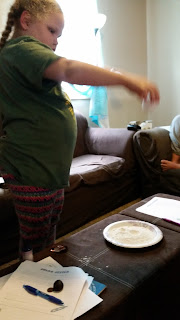 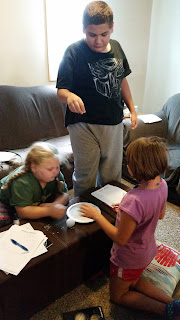 It's a plate of flour and they drop various sized marbles and other objects to see how the craters are made.  I think they used a marble, pompom and a buckeye.

This week in science we learned about the sun.  The boys have decided they want to work more independently on science and history.  And some days I agree that it's too distracting.  So I agreed to let them work on those subjects more independently.  I have their lesson plans changed now for the next couple weeks to reflect the new change.  We'll see how it goes next week.

In history we are trying to finish the explorers of the New World.  We are all anxious to finish learning explorers and move onto Colonial America.  We have one more week of explorers to finish up and then we will be onto the next Unit in our history.  I changed history up.  I was doing it on my own, but it was getting overwhelming.  I found an American history program similar to Story of the World.   We are using All American History Volume 1 right now.  It's very indepth!!

One day they spent a few hours making retirement cards for their grandpa.  Brayden drew a train (he and grandpa both like trains), Caty drew cats (something grandpa loves), and Lydia decorated a poster with cats too.  Joey decided the Transformers sticker approach was best.   They blew up balloons and the girls made grandpa a rhubarb cake.  They tried to surprise him by hanging the balloons and streamers on their house before he came home from work.  But he surprised us by getting home early.

States we have covered are New Mexico, Arizona, and Arkansas.  Presidents were John Quincy Adams and we reviewed Andrew Jackson (since we just learned about him for the Presidents Homeschool program we participated in.) 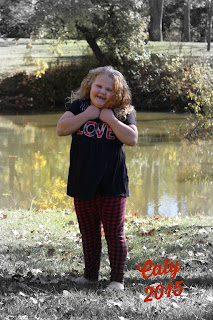 Caty has been working on some smaller unit studies in her "independent" lessons, which means with me.  She finished up the Amanda Bennett Pizza Party Unit Study.  She had fun with this.  She liked learning about all the facts behind pizza and all the "weird" items that people eat on their pizza around the world.  The next week we went through a small Unit on Animal Homes.  It covered badgers, gorillas, prairie dogs, and some other mammals.  I incorporated some YouTube videos on the animals.

She is primarily using Reading Eggs and Bob Books for her reading right now.  I thought we were going to be on a trip for a month, so I had simplified how many materials I needed to carry.  So I didn't work with her in the Wilson program.  We are just chugging along.  Some days she remembers more than others.  She can fly through some of her Bob books like nothing else.  But others, she struggles with the same books she just finished the day before.

In her math she is almost done with her first Singapore Math book.  I started her 1/2 a grade level down in 1B.  She has flown through this "practice" book and will be starting the 2A book next week.  I told her at this rate she will be in the 3rd grade books before summer.

We added this game to our classroom this week.  Caty has been wanting to learn how to tie knots.  This seems like a fun game.  I wish there were more explanations as to each knot, but what a fun way to practice.  She got very frustrated, but we were successful working on two of them this week. 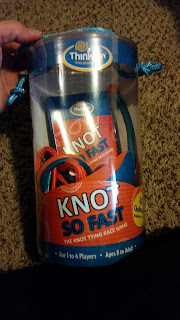 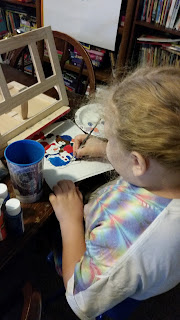 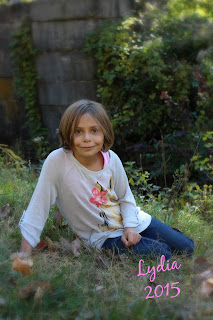 Lydia has been working daily on her Chinese.  She is really enjoying using Middlebury Interactive.  She can recognize some phrases and words now.  So that is great!

In math she is working on her multiplication and she started with place value to the millions.  She said she was struggling, but she is getting a great score in that class.

Since we didn't get to go to New Mexico, we get to go to the American Girl meeting in December.  She is excited and she has been binge reading American Girl Josefina.  This is one of her favorite girls out of the series.  She will have all the books read before the meeting now.  She also read another favorite books series, Goosebumps.  She read two chapter books this week!!  That's a huge deal!

She is working on finishing up a Girl Scout Journey so that she can work on getting her Bronze Award.  She does not really like these books, and to be honest, I don't like them either.  I am leaving this open to if she wants to finish it or not.  She needs to get this all done by July since she will be bridging to Cadette by then.

Being silly while working on a project.  She drew a face on the balloon. 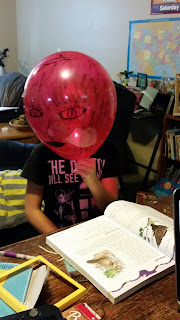 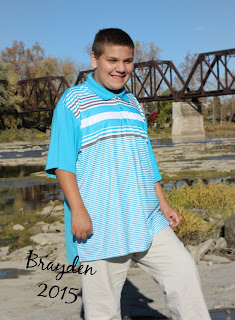 Well, Brayden has been giving me a tough time.  He doesn't want to finish his work.  He only wants to play video games.  I have had to resort to being the mean mom and stripping him of all his gaming privileges on several occasions.  It's the only thing that makes him stop and think.

I am directing him toward different topics to learn about.  Schoolexpress.com has some great thematic workbooks that we have used in the past, and I started with him again.

Brayden has learned how to mop using our Swiffer Wet Jet.  Every time I turn my back he is trying to mop some floor in the house.  He is turning into Mr. Helpful on things that he wants to help on.  Getting groceries, mopping, feeding the cats and even some light cooking.  But forget it if I say put your dirty dishes in the sink or can you sweep your bedroom floor.....He's 13. 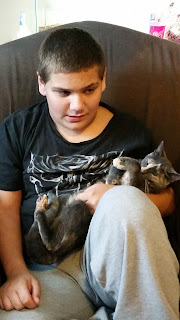 A boys and his cat 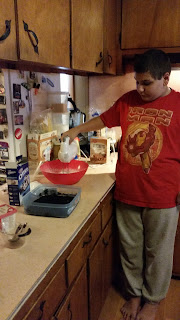 Brayden loves using the hand mixer now.  He is making his favorite oreo dessert here.  I showed him how to make something a little different and less expensive to purchase.  He used pudding and then I let him use the food processor....lol.  He loved that also. 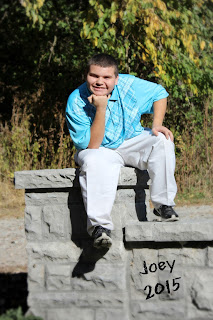 Joey has been working hard on his work.  I added a middle school level literature course for him.  He is struggling a bit with finishing his work.  But we are working on organizing his time.  I remind him that he is spending too much time playing games.

He has been experiencing anxiety attacks though and his memory is having issues also.  So we are just working through.  I check his backpack shortly after he says he is done to make sure he finished all his assignments and he actually completed them.  He has also been skipping questions.  So we are talking about this.

Joey has mastered the ability to write the fewest words possible to answer questions.  This is something else we are also working on.  He literally can write a one word answer for each of his vocabulary words.  It cracks me up, because he always has an appropriate word.  But it's only 1 word.

Messes seemed to happen constantly all week.  It was mainly books and books and more books.  I spent so much time working on Homeschool with Minecraft stuff that I lost track of keeping up on cleaning. 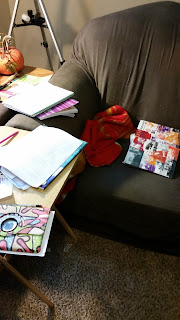 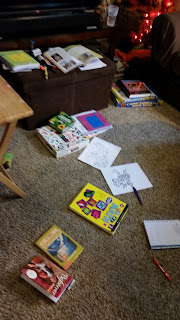 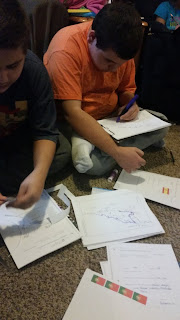 We had normal activities.  Lydia started back to cheerleading.  Both girls had gymnastics.  Then Thursday we went to see my niece's winter choir concert.  It was a nice evening with family.  The kids were excited to see her perform and got her flowers and candy for her performance. 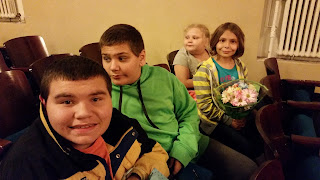 It's been a successful academic couple of weeks.  Emotionally it has been rough, but I'll figure out how to make it past it.  It's really the life of a parent with special needs kids.  I know I need to get outside a bit more than I have been.  The trouble with fall/winter is the lack of sunlight.  That really affects me.  I just need to work harder on some me time and take care of myself a bit more.

I hope everyone has had a wonderful couple weeks!!  See everyone next week!!!

Linking up with other moms at Weird UnSocialized Homeschoolers.

Posted by MommyKuehner at 7:15 PM