We took Monday off because Daddy had the day off.  The girls had a sleepover with a friend who just moved back to our area and also their cousin.  It was sort of last minute in a way, because we had a busy weekend with our family.  We ended up going to the mall and doing some shopping as part of their "girl" day.  NEVER again will I go to the mall the day after New Years!!  That place was nuts.  We were in Build A Bear more than an hour!  Another line was 30 minutes long to make a purchase.  It was sad how understaffed the stores all were. 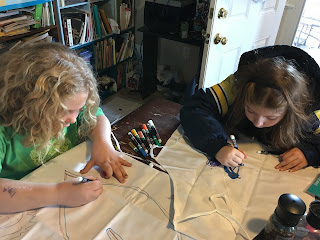 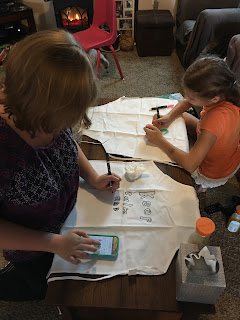 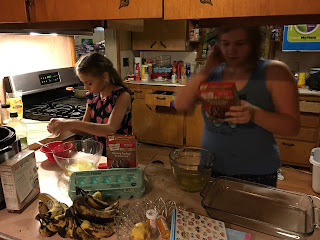 Glow in the Dark Dance party 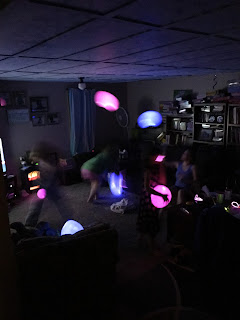 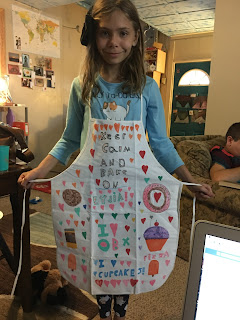 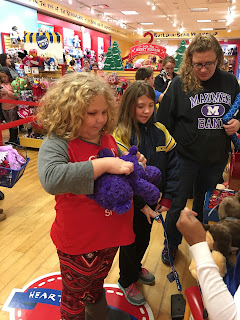 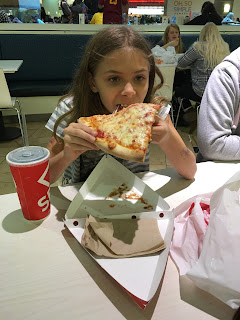 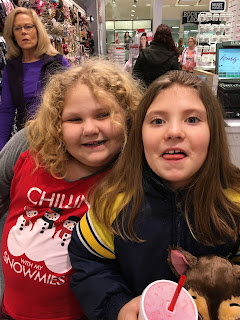 We started our school back up on Tuesday.  This is what we covered this week....

This week we learned about the Roaring 20s.  We watched some great documentaries and also watched a couple movies about this time period. 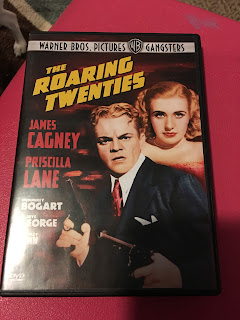 In Geography we visited Spain and Portugal.  For our meal we made Tapas, which are like little sandwiches.  The kids each picked their own toppings for lunch. 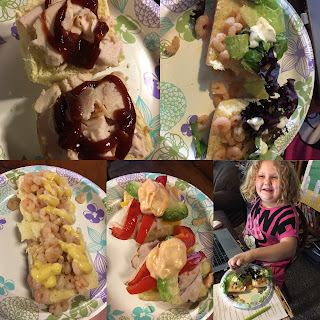 Instead of copying facts this week, I tried something different.  Each child had a suitcase that we Packed with places we visited in Spain/ Portugal.  The kids really liked this and I plan on continuing it.  It's a little more work for me, but it's one of the things that makes homeschooling more personalized for our kids. 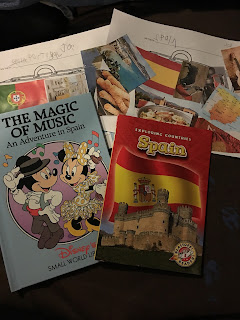 We watched the Mythbusters from Alaska this week.  We re-created the ice boat experiment.  The kids wrapped bowls in newspaper and then we froze them to make their boats. 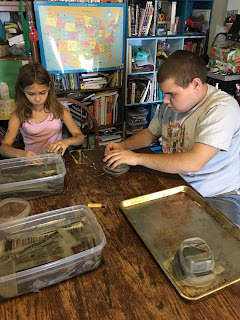 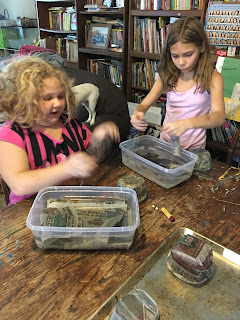 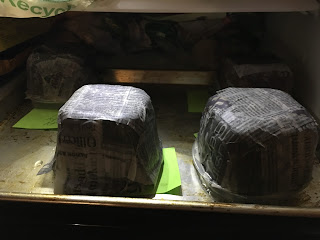 Then we tried to see how long they would float. 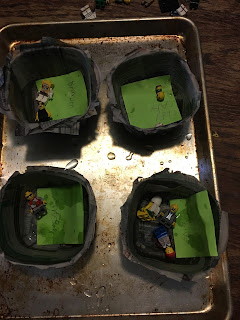 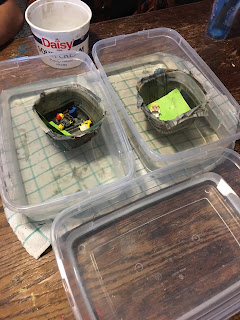 All the boats floated for 45 minutes and didn't sink.  They did lose some layers and took on water.  We could've probably kept going longer if they would've kept emptying the water out.  This was a fun experiment! 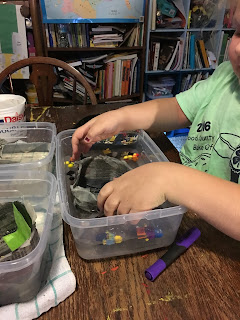 The kids were all working on multi-digit multiplication.  The older kids were working above Caty's level.  This was soooo confusing to them all.  But I think they got all the steps down.  They had to get up and show me how to solve a problem so I could see them performing each step. 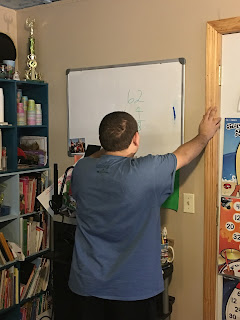 Caty working on her math. 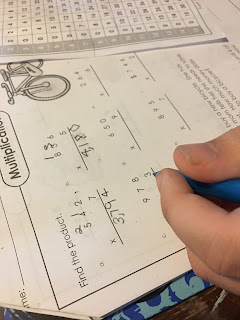 Lydia decided to try out the Spelling Bee this year.  She wanted to do it last year, but we ended up going to Florida for the month of January and should couldn't do it then.  So we have started studying her words.  Since she is really considered 5th grade, she has to study words through 8th grade.  She's not doing too bad right now.  Everyday she is studying 20-25 words.  She only has until February 7th to get her studying in before our Bee night.

In Reading, Joey read the first book in the Warriors animal series and Brayden read I Survived The Attacks of September 11, 2001.  Lydia didn't do her reading this week because I replaced that with her spelling practice.  She was also working on her Financial Dreams badge.

In Grammar, we worked on Dictionary work.  They used both a hard-copy dictionary and an online dictionary.  We also did a review of alphabetization.

Since I discovered I can eat dairy, I made a no-bake Peanut-free "Peanut butter" pie with sunflower seed butter.  Ohhhh....it was sooooo yummy!! 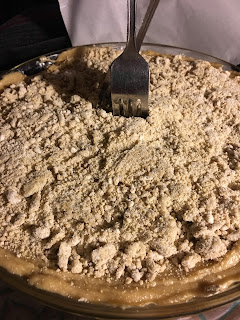 We got Thomas up and running this week! 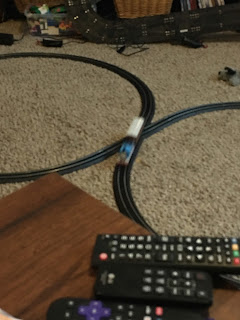 On Saturday, Lydia heard a thump on her window.  It was this bird hitting her window.  We brought it inside after we saw it not moving for a while.  We called a rehabilitation center and they told us what to do.  But his wings seemed to be ok by morning.  I really think as cold as it was outside that night, that he would've died.  By carefully bringing him inside it allowed him to wake him from being knocked out from flying in the window.  We were very careful.  I kept him in a fish tank with a lid on it so he couldn't get out. 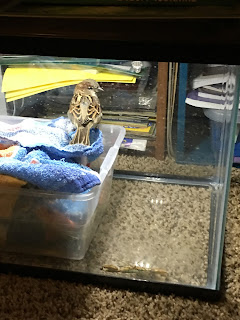 This was after being inside for a couple of hours.  When she first put him in the tank, he was not moving at all. 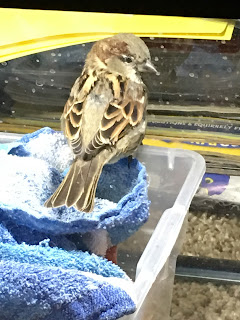 So we released him the next morning.....You can see him flying away in the lower shot.  The puppies were enthralled with this moving object that was in the house. 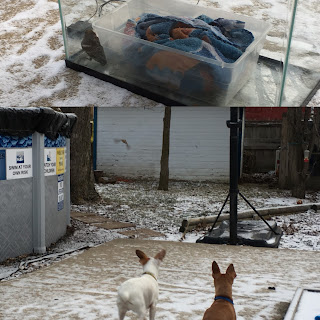 We had a good week.  Got our work all done, and I think we learned a lot.  I may have finally figured out our current workload and adjustments that need to be made for each child.  It's going to be busy through this month.  So it's a little extra planning on my part to take advantage of every educational opportunity.

I hope everyone had a wonderful week!!  Linking up with other moms at Weird, Unsocialized Homeschoolers.

Posted by MommyKuehner at 6:15 AM