I feel like we never really accomplish much each week.  But when I see it in these posts, I finally see that even though I don't feel like we are doing enough, we are really doing a lot.

We have been having a lot of small political discussions with the kids.  Of course, the whole country has been due to the inauguration this past week.  I have presented both parties to the kids and watched the debates also.  They saw good and bad news reports as either candidate messed up somehow in the media.  This past weekend though with the Women's March right after the Inauguration, there were some questions about why?  What did all of these women fear?  So we continued our discussion about how the media has a way of spinning stories.  We also talked about extreme views and I could not give them a full explanation of the Women's March.  I could not tell them one main reason why it took place.  We continued to look at our government though.  In the van we listened to some of the questions being asked of the Trump's cabinet appointments.  This in turn brought up a few questions about why they were asking what they were being asked.  So more discussion as the kids tried to wrap their heads around how hard the Democrat party has made the whole process.  I was honest and said, I couldn't explain it since I was confused myself.

But this week, we watched the Inaugural Address, which we recorded.  We also watched a History Channel special called, Trump:  Path to the White House.  This was very interesting.  It wasn't just a boring documentary.  I saw him in a different light.  Now they will understand a little better the person who is now our president.

Caty has been struggling with spelling and letters, so I needed to come up with something that may help her with this.  Here's the weird part, she can read.  But she cannot spell words or remember the letters needed or the sounds.  She can read a word, but cannot do anything else with it.  So I re-started her Reading Eggs subscription.  It gives us both a bit of a break in this frustration until I can figure out our next step.

We started World War II this week.  We learned about the causes and How Germany started down the slope toward the war.  We started watching World War II in Color on YouTube.  Very interesting series.  There's a lot of parts.  We'll be spending the next 3 weeks studying the war, so we will have plenty of time to finish all the parts.


The girls started their rabbit projects for 4H.  Yep....4H season is upon us.  This means concentrating on 4H instead of our Girl Scout badges, which is what they were doing.  Lydia did really well and has knocked out several of her badges.  Caty is working on hers, we're going to hit quite a few with her after 4H season.  Lydia can do so much more of her badgework independently, which is why she has more.  Caty's ADD has been a road block along with some other learning issues.   Plus she has little interest in some of the badges....lol.

This week's countries we "visited" were Belgium and Austria.  Love the New Dimension videos on Amazon.  They work out so well, and their length is perfect. 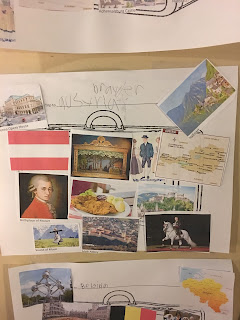 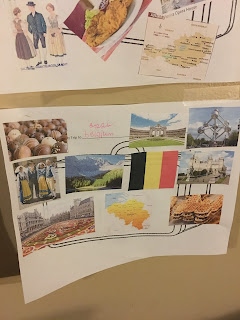 Our meals were a fried potato and ham dish from Austria. 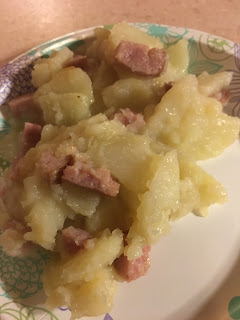 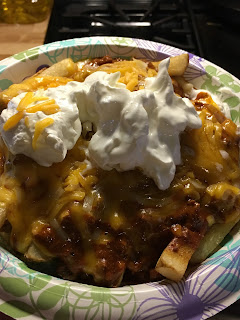 The girls working on their water color art in their Art class.... www.blossomingartists.com 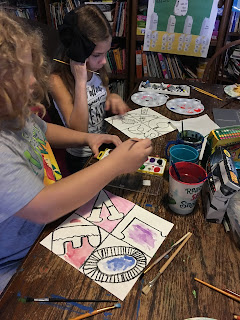 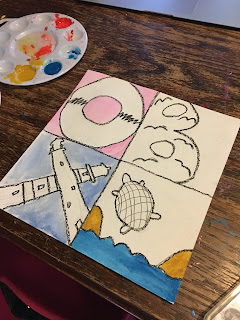 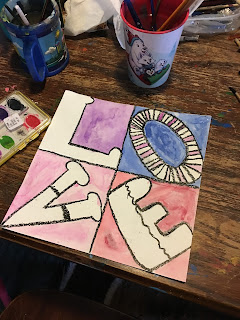 Science this week was a combination of Wild Kratts video with animals report and episodes of the Science Channels new show.... Street Science.

The kids were excited that we got our first box of books from Scholastic.  I was able to create a teacher account so that we can order from the same fliers that the schools get.  (You need to contact them as a homeschooler...took a couple weeks to get it to go through right.)  I earn points for every purchase I make, just like a teacher and can use them in the scholastic catalog.  Caty loved the Unicorn book she got.  I got Lydia some Alice in Wonderland books she loves.  She has already finished one of the three.  I found a couple Star Wars books and video game books for the boys.  I'm making some adjustments to our "reading" time in the next few weeks.  Hoping it gives us all more time for fun reading and not just reading for school and work all the time.

The books the kids are reading this week include:
Joey - Under the Blood Red Sun
Brayden - Geronimo Stilton and the Cheese Camper
Lydia - Matilda (her reading comprehension) and Irish Stories, Geronimo Stilton - Alice and Wonderland
Caty - Enchanted Pony Academy Book 1 (Her new Scholastic Book), lots of smaller library books.  I lost count on.
Me....Lots of Minecraft books for classes

Lydia is making progress in her Spelling Bee practice.  She is doing well up through 5th grade, but WOW!  get past that and it's confusing.  But I don't think I could spell some of those words without help from a dictionary!  At Bee practice, she struggled but is trying really hard.  She also seems to be keeping a good attitude, even though she is missing words.  I am very proud of her for that.  Sometimes that means meltdowns, so definitely an improvement there.  I signed her up and paid for Word Club so that she can practice the words easier than writing them.  Plus she can continue practicing after the Bee is over.

The girls had a cheer clinic on Saturday with a local high school.  They had a lot of fun.  Caty even got to cheer in the high school basketball game afterward.  Lydia didn't go to the game because she went to her first Midnight Madness with her 4H group.  She had a blast and Caty had fun at her event too.

Lydia had her first volunteer shift at the Stable where she rides at.  She had a lot of fun.  She'll be volunteering there on Thursdays for a couple hours almost every week.  She'll really start to get to know all the horses and what life is really like in the stable.  Here she is getting a refresher how to put a blanket on the horse that's going outside. 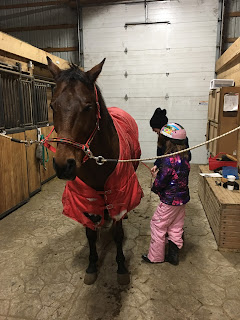 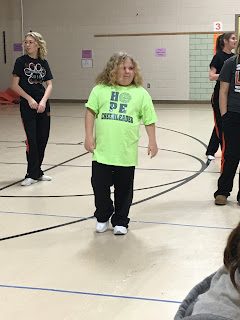 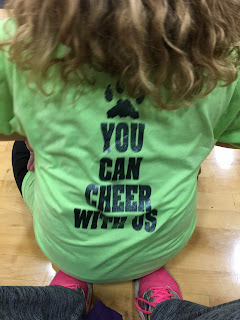 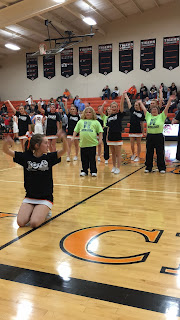 The kids also had basketball practice.  Brayden is really enjoying basketball this year, although he will claim that he doesn't.  But the smile on his face when he gets a basket or helps one of his teammates is great!

Linking up with other moms at Weird, Unsocialized Homeschoolers....