Disclosure: I received this product free through the Homeschool Review Crew

We recently had the opportunity to review the third book in the Hamelin Stoop series - Hamelin Stoop:  The Ring of Truth.  This series is published by 12 Gates Publishing.  You can purchase this series from major online book retailers. 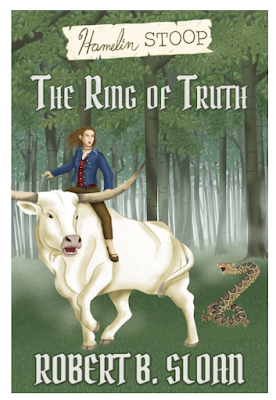 The Hamelin Stoop series is based off of the story of Hamelin Stoop.  His parents were forced to make a drastic decision to protect him by secretly leave him on the porch of an orphanage.
There are two other books in this series,  Hamelin Stoop series - Hamelin Stoop:  The Eagle, The Cave, and the Footbridge and Hamelin Stoop:  The Lost Princess and the Jewel of Periluna.  I do recommend that you collect the whole series.
In Hamelin Stoop: The Ring of Truth you will be taken on an adventure of mystery and intrigue, and a healthy side of adventure as Hamelin is pursued by the evil Chimera and his agents.  Hamlin suspects his friend Layla is the lost princess form the Land of Gloaming.  Hamlin's stories trigger memories with Layla.  Is Hamelin alone in his quest?  Or does he now have a friend by his side in the question for the Ancient One's purpose?
The Hamelin Stoop series is written for kids roughly late elementary through middle school.  I would say actually suggest they are at a Young Adult/early high school.   Lydia and Caty have been reading through our copy.  It will take the average reader a bit longer to read this story.  Which is great for Caty, but more frustrating for Lydia.  The story though has kept her attention, which is great.
12 Gates Publishing along with Robert Sloan are working on a Readers Guide to help students with their literature studies and they will be releasing this soon.
Caty and Lydia are truly enthralled with this new series.  They both love other science-fiction monster or ancient gods series fantasy series, and the Hamelin Stoop series has become a favorite with the girls.  In fact, Caty and Lydia have both asked me a couple times if they are going to be making a movie from this series.  This fantasy series is a definite read for tweens!!
Click on the link below to see how other members of the Homeschool Review Crew enjoyed this series and what they families thought of them.

Posted by MommyKuehner at 11:52 AM