This week we studied two countries in Africa for World Travelers Club (it's the geography club in our homeschool group).  This is what we learned about Sierra Leone (Zimbabwe will be a separate post).


The flag of Sierra Leone was officially hosted on April 27, 1961.  The flag is tri-color.  The green stands for the agriculture, mountains and natural resources.  The white stands for unity and justice.  The blue stands for the hope that the capital of Freetown (a port city) can help to bring peace in the world.

Sierra Leone is the home of:

We talked about the civil unrest that also existed there.  But we touched very briefly on this, as this really upsets Joey when we discuss these issues and it completely destroys the remainder of the school day.
The boys opted out of this art project, but yet again I turned to Global Art for project ideas for these country studies.
We chose to do mud art.  We tried the way the book said to with water, dirt and colored clay.  But we did not have any success.  We even left the mixtures sitting overnight in hopes of making it work.  Nothing... So instead we created our paint with dirt, liquid tempra paint and a little bit of water. 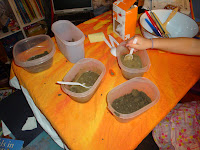 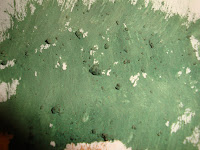 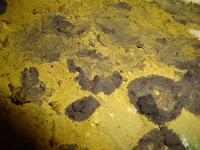 The texture was really unique.  It fits right into her K12 art class.  It was cool to paint with colored mud. 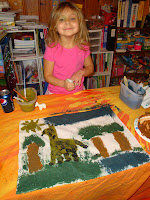 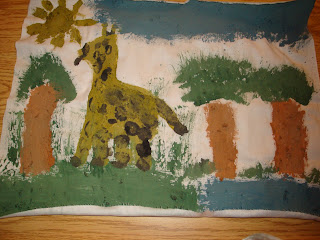 This art style is popular in this area of Africa.  We learned that it is important to stretch the muslin in a hoop since ours began to curl up as it dried. Animals were painted as a symbol of protection against danger and were believed to help hunters to bring in a good catch when they were worn on their clothes.
Our World meal for this country was:
Groundnut Stew
Koso Weller
Reprinted from the Wisconsin State Journal
1 pound stewing meat
2 large tomatoes, diced
1/2 cup oil
1/4 cup groundnut paste (peanut butter)
1/2 tsp. "Mrs. Dash" seasoning
1 large onion, chopped or sliced
1 large pepper, finely chopped
1/2 tsp. cayenne pepper, optional
salt to taste
Season meat with Mrs. Dash. Let it absorb for three hours. Brown meat in oil. Add some water and simmer until tender. Remove and set aside. In the same oil, sautÃ© pepper and onions. Add tomatoes and stir briskly. Mix groundnut paste with 1/2 cup water to form a thin paste and add to stew. Stir, add meat, salt to taste and let simmer 15 minutes over low heat. Serve with rice, boiled yam, cassava and green vegetable.

We made adjustments.  No onion (due to allergies) and no Mrs. Dash for the same reason.  I used salt and actually diced the yam up and included it in the stew.  It was very tasty and the hubby ate two portions.  We could not convince any of the children to try in, even with peanut butter as an ingredient.  Go figure! 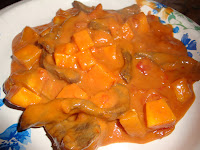 Next week we will be studying India.  MMMMmmmm can't wait.  Joe and I love Indian food!

Posted by MommyKuehner at 2:06 PM