Yebo- Our study of Zimbabwe

Yebo is the common hello greeting in Zimbabwe.  This month in World Travelers Club (the geography club in our homeschool group) the two countries to choose from was Zimbabwe and Sierra Leone (see another post).  We decided to look briefly at both.  Both were difficult to break down to younger terms due to the civil unrest that has existed in both countries.  There were tears shed when we spoke briefly about the terrors that many had to live through.
Again I turned to YouTube for travel videos to show us some facts and sites of the country.  We did see some evidence of the civil unrest.  We also saw some great shots of Victoria Falls and Devil's Pool.  We learned that it is one of the Seven Wonders of the World.
This is during a dry season: It only boasts being the largest falls due to it's size.  It is about 5,604 feet wide and 360 feet high.
Devil's pool is a naturally formed swimming pool directly at the top of the falls.  We talked about what it would feel like to be that close to the edge of a water falls and not worry about going over.

One day we talked about the flag of Zimbabwe and that it was not adoped until 1980.

We were also able to compare why flags look the way they do.  Each strip and symbol represents something special in that countries history.  The same as the United States flag.
We talked about indigenous tribes.  And we also we selected another activity out of the Global Art book.  This tied in great with talking about indigenous tribes.  Grasses are woven together to  make their baskets.  We used scraps of fabric and decoupage glue. 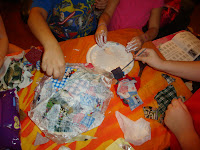 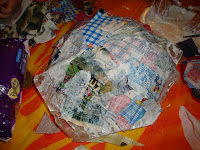 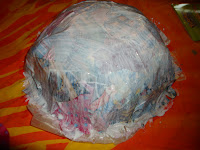 Our finished bowl.﻿  Not really a good popcorn bowl, but fun to make. 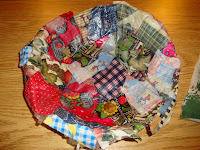 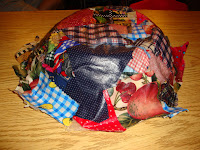 We also learned about the Lion, giraffe, rhino﻿, and elephant.  The animals normally associated with all of Africa.  But we learned that these animals do not live in all parts of Africa just certain areas.  So many different animals that live on the same continent and not be in the same area.
Our  meal from Zimbabwe was Zimbabwean meatballs.  I figured this was a safe dish for the kids, since they are picky most days...or at least some are.  I served the adults with diced tomatoes and green chilies.  The kids I served with gravy.  They were quite tasty. 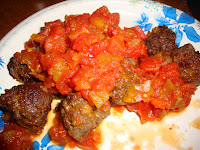 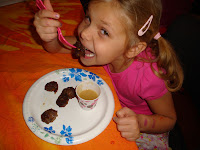 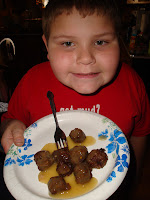 Posted by MommyKuehner at 5:31 PM