This week was our Monthly World Travelers Geography Club.  Since we are already doing world geography this year, I just time the country that the club is doing with our study that week.
This week we talked about India. 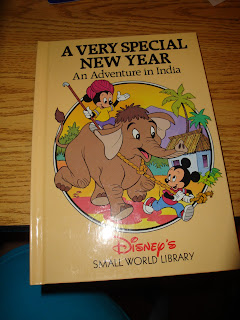 We located India on our wall map and watched some Youtube travel videos about what street life is like in India.  We looked about some animals of India and then we visited an Indian Deli/grocery store to see all the spices that they use in their cooking. 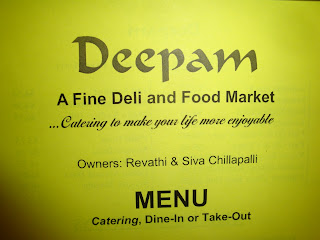 Lydia found these fennel seeds.  She said They were prettier than they tasted. 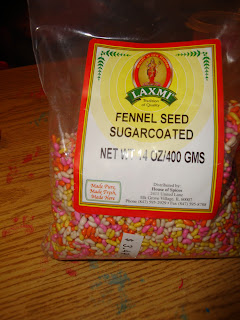 Here Caty is enjoying her rice and naan bread.  She didn't like the chicken, it was too spicy. 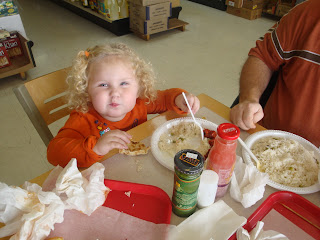 Lydia liked the samosa, chicken, rice and naan.  The chicken was a little spicy for her.  She also really liked the mango drink. 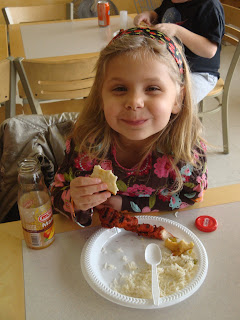 Brayden only liked the naan.  He doesn't like chicken usually, so that didn't surprise me. 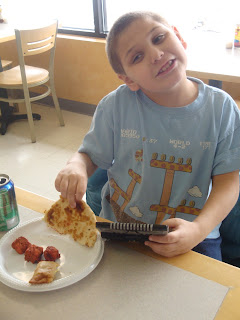 Joey was already in a bad mood before we got to there, but he at least tried one bite of chicken and a couple bites of bread.  But he didn't enjoy any of the food. 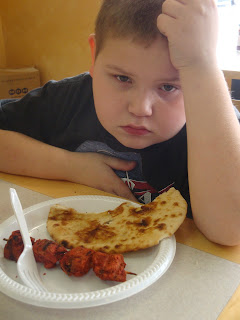 Since I have so many food allergies, I had to wait to eat until I got home.  Soon as we did, I made my own homemade gluten free samosas.  I filled them with sausage, potatoes and peas.  MMMMmmmm.  We had leftovers the next day too.  Lydia enjoyed these also. 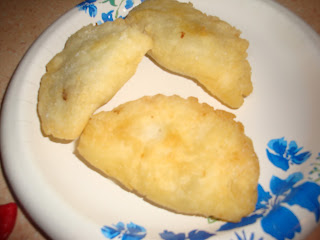 For our World Travelers Projects, the boys chose to talk about the ancient game of Pachisi.  I helped them cut out a game board from muslin.  I also helped them draw the squares.  They painted their board as close as they could to an example we found online.  Here's the finished product. 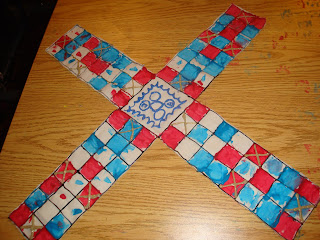 We found pictures of cowry shells (what is used like dice for the game) and a picture of men playing pachisi  in the late 1800s. 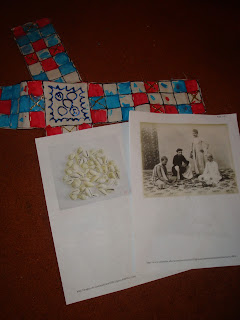 Here's the boys after they finished giving their presentation to their dad. 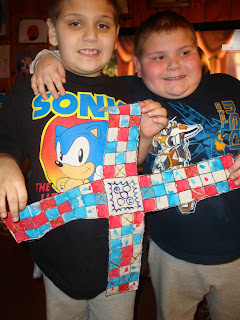 Lydia kept changing her mind all week.  She knew she wanted to wear a sari.  We had ordered the material from joannfabric.com a few weeks ago so that we would have it for this week (our area is pretty lien on material).  She finally chose to talk about the Tale of the Penny wise Monkey. 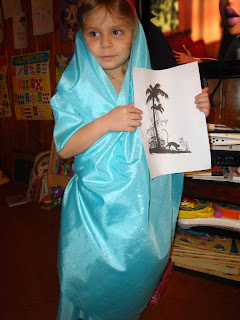 Us practicing her sari. 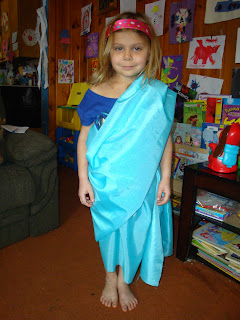 We learned about tigers and cobras.  We saw that they believe in many different gods.  We also learned that it is a very crowded country and that cows used to be able to go anywhere they wanted.  The boys thought it was crazy that a cow could walk in our house and we wouldn't stop it.  Of course they really grew scared when they thought of not eating a hamburger anymore:)!!

Next week we are going to study Israel.  I can smell the hummus, Isareli salad and gyro style sandwiches....at least for dad and I.  The girls too.  I may make latkes for the boys to sample something different.  And even some honey cake....another yummy country next week.
Posted by MommyKuehner at 8:56 PM