So we have been MIA this week from posting because we were trying to relax in Tennessee.  My hubby works from home but is based out of the Corporate office in Franklin/Cool Springs, Tennessee.  When he comes down to work, we usually follow him and visit all kinds of wonderful places around the Nashville/Middle Tennessee area.  This week we visited Fort Granger, Cheekwood, Belle Meade Planatation, Nashville Zoo, Vanderbilt Children's ER (Caty fell at the zoo and we were told she needed stitches...yeah not a fun day), a cool Artsy place called Sodium and tomorrow still up in the air as to how to finish our trip.

But from the day we arrived off of I65 into Franklin we heard a humming noise.  At first we thought something had died in our van as we got off the Interstate.  Scared us...since our van just got out of the shop for a starter/ti-rod issue and the last time we were in Tennessee the van broke down and almost had to be towed.  Then we realized it was outside...and we heard it everywhere we walked throughout downtown Franklin.  I recognized the hum finally as Cicadas.

Turns out we are visitng during the 13 year life cycle and there are 1000s of these things flying around!!  They run into you while you are walking down the street, cling to your clothes while going into the supermarket...and getting into your van as you leave the supermarket (as I discovered yesterday).  Our boys are a bit bug-phobic!  So it has been an interesting week of not only this loud humming sound causing sensory issues with them, but there are bugs everywhere.  The girls though are mesmerized by them and try to catch them everytime we have been at the park this week. Caty can say Cicada as clear as her own name....maybe clearer!

One of many that Lydia and Caty found at the park. 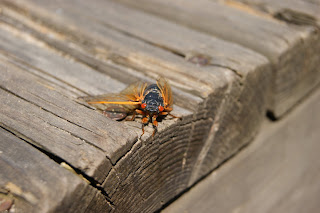 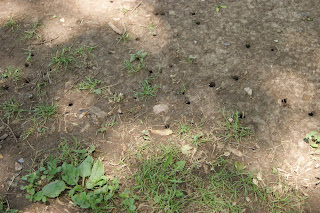 We looked up some information when we started seeing holes everywhere.

After mating, the female cuts slits into the bark of a twig, and into these she deposits her eggs. She may do so repeatedly, until she has laid several hundred eggs. When the eggs hatch, the newly hatched nymps drop to the ground, where they burrow. Most cicadas go through a life cycle that lasts from two to five years. Some species have much longer life cycles, such as the North American genus, Magicicada, which has a number of distinct "broods" that go through either a 17-year or, in some parts of the world , a 13-year life cycle. These long life cycles perhaps developed as a response to predators, such as the cicada killer wasp and praying mantis.[14][15][16] A predator with a shorter life cycle of at least two years could not reliably prey upon the cicadas.[17]
Cicadas live underground as nymphs for most of their lives, at depths ranging from about 30 cm (1 ft) down to 2.5 m (about 8.5 ft). The nymphs feed on root juice and have strong front legs for digging.
In the final nymphal instar, they construct an exit tunnel to the surface and emerge. They then molt (shed their skins) on a nearby plant for the last time and emerge as adults. The abandoned skins remain, still clinging to the bark of trees.

I'm almost getting used to it.  So by the time we head back to Ohio, I will probably miss the sound!

Posted by MommyKuehner at 9:54 PM