Ok...my friends and experts in bloggy world......I need your help.


Caty has sensory issues.  None of which were addressed at her preschool, which annoyed me.  They said they never saw things that I saw.  But I know she does them.  Here is some proof...just a bit.


She loves to color on herself with markers.  At first I thought it was boredom but she does it even if we are busy with an activity.  So we now hide markers and only get them out as needed.


This week we made finger paint with cornstarch and food coloring.  At first she only wanted to use a brush, I wasn't concerned.  I know she has a touch issue with certain messy things.  No big deal there.  But then she realized she liked the soft feel and began painting herself with the paint... 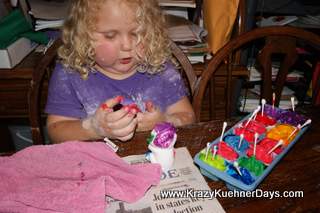 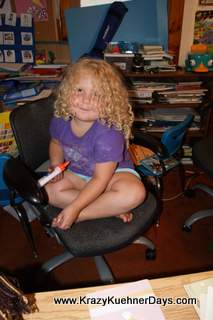 Help!!!!  Any and all suggestions will be greatly appreciated and researched!!!