So we knew that we were going to need new brakes for the van.  I was really hoping that it would wait another two months.  But of course over the weekend, the van brakes got bad.  They started that nasty scraping noise.  So I called the auto shop Monday and sure enough I received the warning to not drive it until they looked.  Fortunately our van doesn't have brake drums, so after they replaced all 4 pads and rotors, it was less than I originally was estimating.

But that whole thing kept us home on Tuesday and we missed drawing class.  I had purchased the book that our drawing teacher was using and we practiced some of the techniques that they were using in class.

Our state this week was Alabama.  We have entered the Southern Region.  Caty made Alabama biscuits, which are biscuits that contain yeast and allowed to rise.  Lydia heated some canned sausage gravy that Grandpa had given her.  And they ate a feast.  (I made Joey some milk gravy that he could eat since the other had stuff in it he couldn't.)   We learned about Helen Keller, a famous resident of Alabama.  After reading a story, we wrote a short paragraph about her.  Then we watched the movie, The Miracle Worker.  We had a couple good discussions about the struggles that she faced, and how frustrated she must have been trying to communicate. 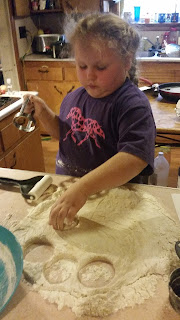 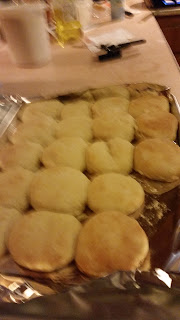 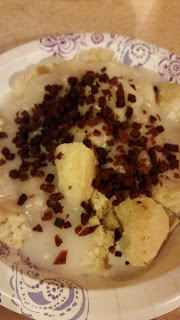 This is a shot of them copying the paragraph they wrote together off the whiteboard. 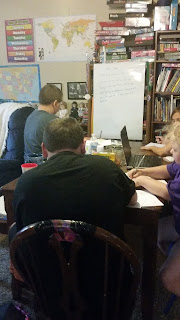 The kids and I also started a our donation for a project that another homeschool mom started.  We are working on making scarves and hats for the homeless/needy in the area.  Lydia is trying so hard to crochet, but she keeps getting frustrated when her yard splits.  She does get frustrated easily.  We bought 10 yards of fleece we will be working with this weekend in order to make scarves.  In the short time frame, there is no way I can do as many scarves.  It takes me two days with distractions to finish a decent length scarf.  So I am going to crochet my fingers off, but no we will be able to make a decent donation with the fleece scarves :) .

This week Caty started multiplication.  I am using a combination of Saxon, CTC math and Horizons with her.  All 3 programs seem to be doing well for her.  She's grasping the concept of multiplication (I think).  She did a worksheet independently where she had to write a multiplication sentence for the groupings.  I was proud of that.  In her other coursework, She started working through the Amanda Bennett Pizza Party Unit Study.  I think she thought she would be making and eating pizza for 3 meals a day the entire time.  But she said she wanted to know the history of food.  So this is what she is doing.  We started back in her Language Arts program since she has been making advances in her reading, and she has done pretty well this week and last week with her work on common/proper nouns in sentences. 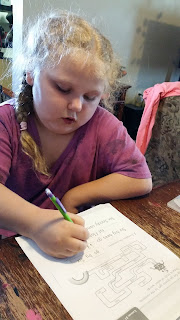 Here is her borax snowflake that she put in the solution at the end of last week. 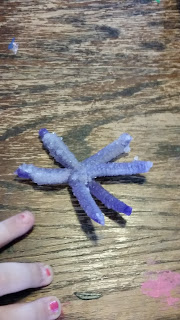 The weather was so nice on Monday that we took advantage of it and I took the kids out to practice their archery. 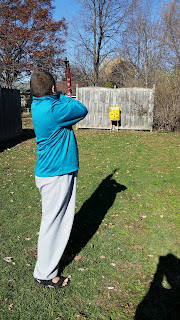 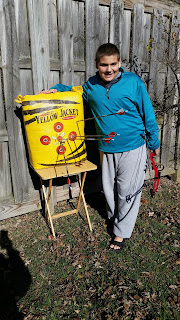 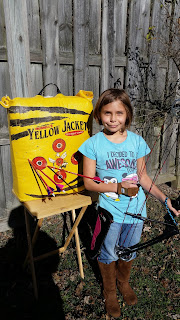 Caty practiced too, but said she was done after one round.  She and Joey rode their bikes instead while I mowed the lawn.  Yes...still mowing the lawn in November.  I think it may be the last time this season.  We are in Ohio...so we should be done by now!

I had to take a mom sick day this week and that really threw our whole week off.  I suffered from a horrible migraine/sinus infection on Wednesday.  It was so bad I had to even cancel live classes on our Minecraft server.  I never do that.  The kids were pretty self-sufficient all day, minus pills.  That was difficult to hand out, but I got through it somehow.  There was a huge mess in the kitchen, so I know we need to work on those cleaning skills now too.  Stuff that should have been thrown in the trash can, were not.  Seriously....something that easy.  I know some of them ate ice cream for a meal too.  But they didn't go hungry, so that is all that matters.

But when I woke up Thursday, I obviously was very, very weak.  I pushed through most of the day.  But rested a lot in bed.  The kids were supposed to finish their Minecraft math facts page.  You would think they would have loved that, but nope.  They fought me all day on that.  3 of the 4 finally finished it.  We also missed American Girl Club, which Lydia worked hard to prepare for.  I felt really bad.  I was fortunately able to reschedule their gymnastics for next week so that we don't lose out on that.

Joey took his first multi-level Government test.  He is working hard and realizing that the high school level of work he is now doing is harder than he thought it would be.

We dog-sat Sunday and Monday.  Brayden absolutely had a blast making sure Pepper was comfortable.  He was very concerned with where she slept and what she ate.  I'm glad we didn't have a bunch of treats.  Pepper would've gained 10 pounds in one day....lol 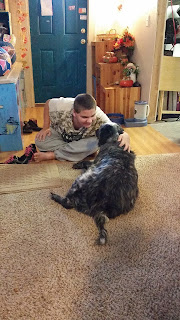 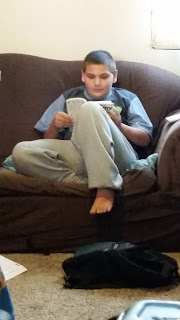 Joey started working on snap together models this week.  He struggled a bit on a few pieces.  But seems to be making progress on his Back to the Future model.  We will have to go model shopping for him again soon. 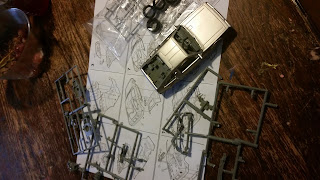 We did add another group project to our weekly lessons.  We will be working on the Computer Programming class from Schoolhouse Teachers.  I figure we will try and work on 1-2 lessons a week.  It's new to the girls, but will be review for the boys.  At least most of it will be review.  It's something they all need, and a good reminder for me too.

I was feeling guilty about how much we didn't get done this week, but after looking at all that we did do I am not feeling as bad.  We still need to get our science and history caught up that we would've done on Wednesday and Thursday.

Friday we are planning on seeing the Peanuts Movie.  The kids are all wanting to see it.   So it's a great treat to see before we head to Archery class.  Daddy will be home late in the evening, so a nap may be in order for mommy sometime also.

Hope everyone had a wonderful and healthy week.  See you next Friday.  We are on vacation next week, but it's a staycation with our extracurricular activities mixed in.  Should be an interesting time.

Linking up with other homeschool moms at

Posted by MommyKuehner at 6:40 AM