We have been using IXL.com for a few weeks now.  I figured out a way to work on some subjects together.  The girls do not feel overwhelmed.  They both have accounts, but we work on them as a group.  I project the program on the TV and they take turn answering questions while we work through the problems.  This has worked out so well.  I am working with them on language arts areas (mainly writing) that they are struggling in. 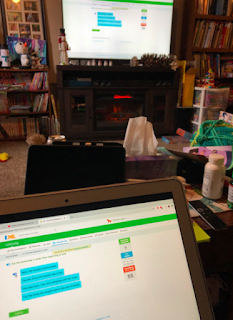 Geography this week was Germany.  I found these great kits at Home Depot a few months ago and was saving them for a Brothers Grimm unit study.  The girls really liked this project.  We watched a true Brothers Grimm video about Hansel and Gretel and then read a book that made it look so fanciful.  We compared the versions. 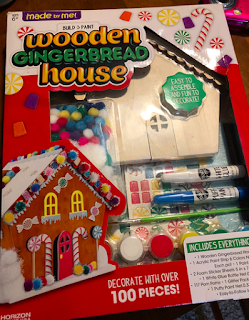 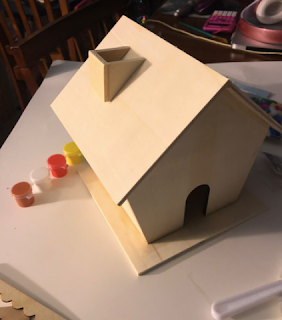 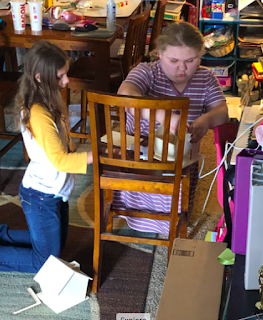 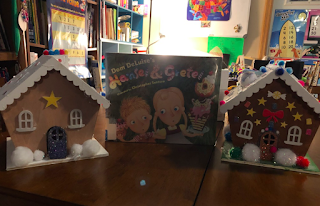 Other books they read. 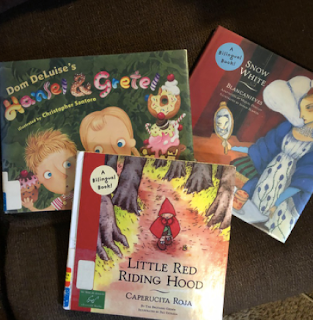 They watched this video.


Germany is an easy country to cook for... 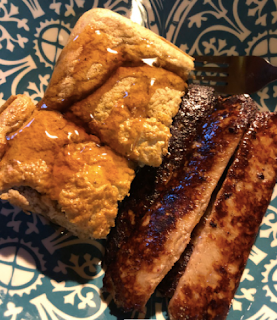 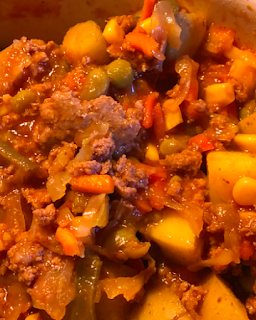 Caty working on her dicing skills for the soup. 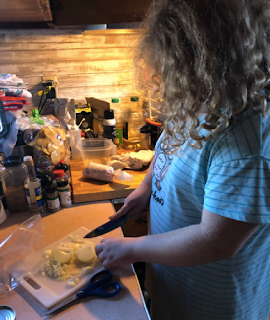 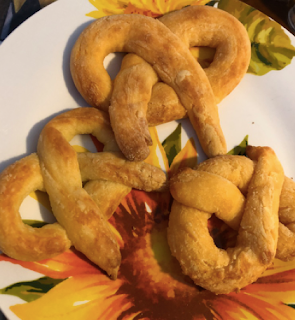 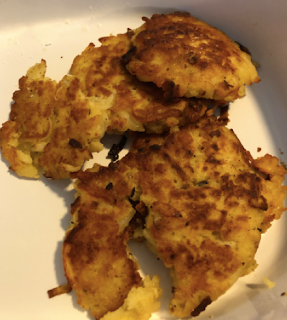 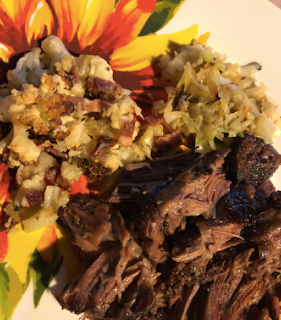 Science they were working on the various elements on the Periodic table and built models of the elements when they become compounds. 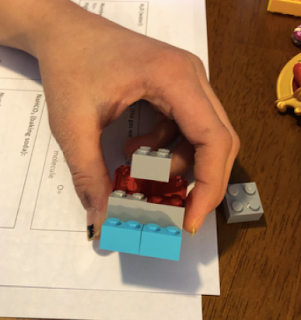 They tested various metals for conductivity. 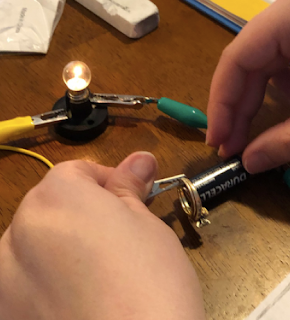 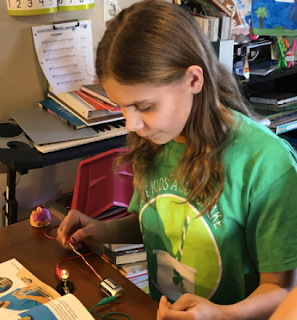 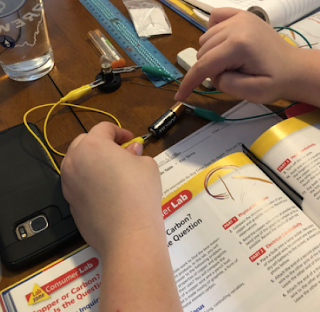 The girls and Brayden are chugging along using Teaching Textbooks for math.  Brayden prefers the workbook over the digital format.  Whatever he prefers.  He will have all his credits to graduate soon.  I love it...and hate it all at the same time.  I guess we will see what he decides about graduation soon.  We have some pending possibilities for him next year when he turns 18.  Decisions, decisions, decisions.

We are watching the Acts to Revelation series from Drive-Thru History.  This is the exact region from our Bible reading currently, so it's worked out great to give them extra geography of the areas we have been reading about.  Brayden really loves this series and the little jokes that he hears. 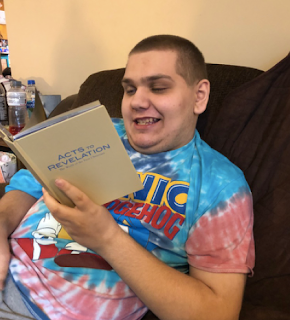 Joey made dinner earlier in the week.  Easy Chicken fried steak with mashed potatoes and homemade white gravy.  It was a hit.  I'm going to add this to the meal rotation and assign him the dish. 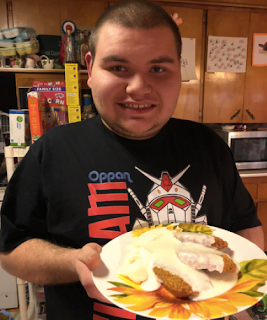 We finally made it to a bowling after a long month of basketball games.  Joey is struggling right now, so he is using the ramp to help him with aim. 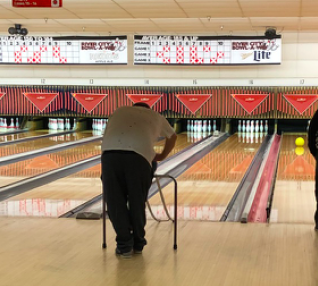 Brayden started one of his 4H projects...MMMMmm Cookies.  He made 3 batches of cookies last week.  My kitchen did survive...barely.  But everyone liked them. 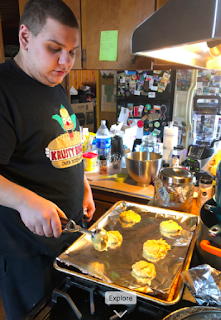 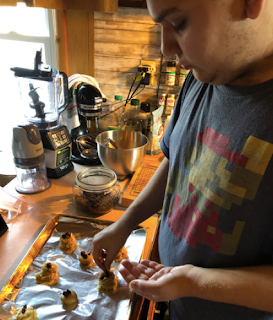 The boy's basketball team had their last playoff game.  It was game two and we lost by 1 point....yes... 1 point!!  It was so close!!!  The game was amazing!  These guys worked hard all season and played their hearts out.  They deserve a huge round of applause! 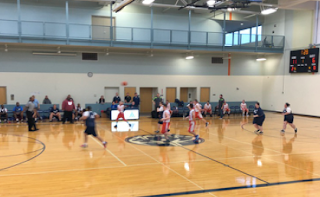 I treated myself to a new spice rack that looks like chicken wire.  I have a farm house theme going.  I love this! 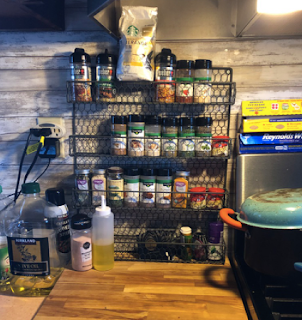 On Friday some friends spent the day with us.  The girls worked on some math, and started their Congo study together.  It got a little crazy and we lost track of time and went to see the LEGO 2 movie also.  It was a great time with out friends. 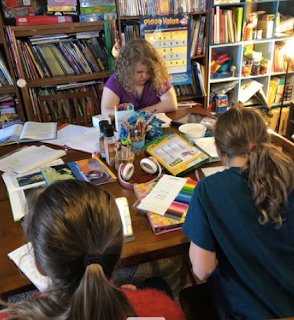 Joey stayed home from Dayhab.  He loves to babysit.  He and our little friend were playing dinosaurs together. 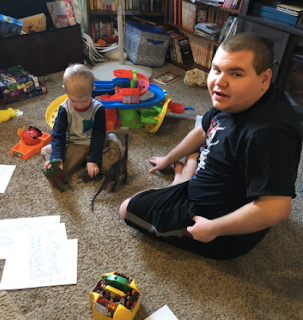 That night we hosted a basketball and dodgeball game with friends from our Kingdom Hall.  It was soooo much fun!!  We are doing it again really soon. 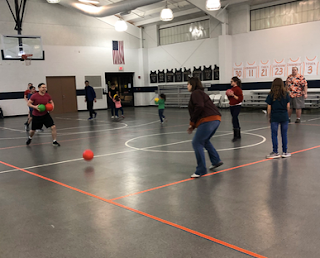 Caty is working on a couple different cooking projects.  In her Pantry Panic study, she worked on a veggie stir-fry.  She said it was too much veggie and not enough rice.  She prefers noodles in a stirfry she said.  So she didn't love this version.  She will try it again. 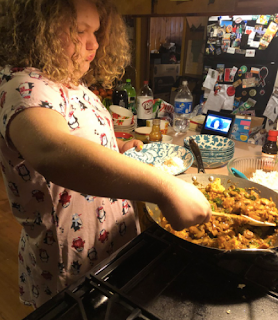 But we had friends over that night and they enjoyed it.  We also had a mini-salad bar out to enjoy our veggies even more! 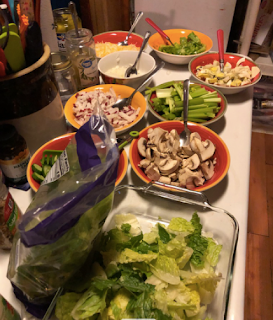 Hope everyone had a wonderful week!!  See you next week!!

Posted by MommyKuehner at 7:00 AM