It was a busy week.  We tried to get a bunch of school work done.  But we also had Med checks for the boys and they had OT therapy on Monday.  There was also Basketball practice.  Lydia, Caty and I were going to see the Rainbow Fish play.  The older kids also had their Homeschool Zoo class.

We talked about South Korea this week in Geography.  The kids located it on our big wall map in the hallway.  We colored the flag of that country and talked about why there is a North and South Korea.  We also read about what the daily lives of kids in South Korea.  We attempted to make crowns from the Global Art book, but the jewels fell off when we went to put them together completely. 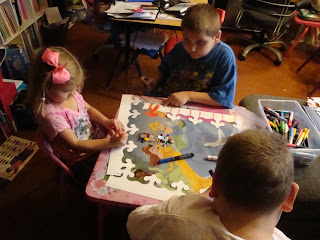 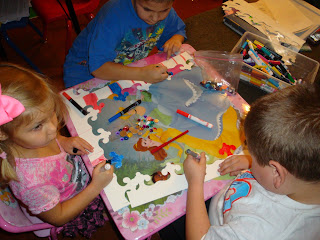 On Tuesday the Girls and I went to see a Rainbow Fish live play.  It was cute, but not what they expected.  They were expecting to see people jumping around in fish costumes.  And instead it was us seeing the ocean through a fish's eyes.  No fish constumes.  Just humans dressed up in pretty dresses.  Lydia still enjoyed the performance, Caty got a little bored though toward the end.  It was a good time though for us girls! 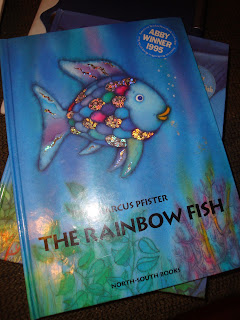 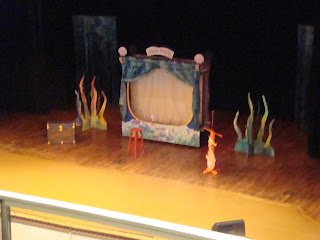 The stage, no pictures were allowed during the performance. 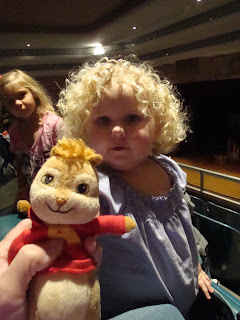 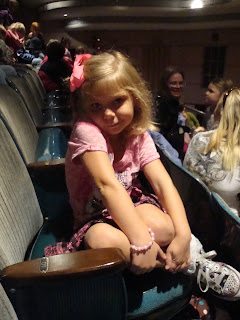 When we got home we made our own pretty fish. 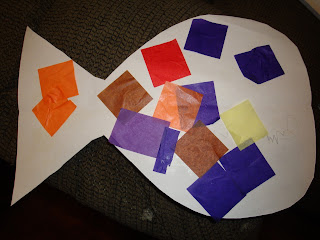 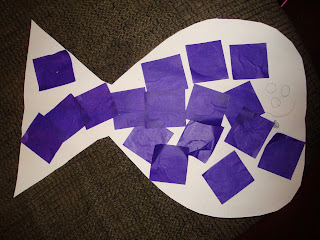 Lydia is working on her days of the week.  We sing the Days of the Week song about twenty times a day.  In fact, Lydia now loves the watching the old Adams Family reruns on Netflix.  I went to http://www.makelearningfun.com/ and printed some really fun activities for Cookie's Week.  We colored and laminated the felt templates on just regular paper and we acted out the story of what kind of trouble that Cookie got into everyday. 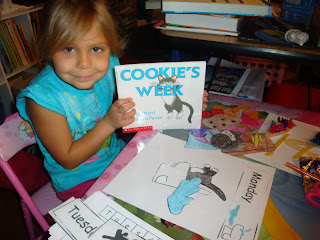 We also worked with The Very Hungry Caterpillar.  ﻿I found a game based on the book at Target last year.  Since she is just now at the point of picking up on the days of the week we broke out the game.  It was a lot of fun and we would highly recommend it. 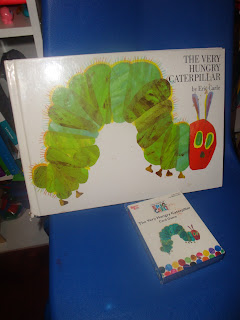 I also pulled out file folder games for all the kids.  The boys practice math facts.  Joey practiced putting popcorn kernals in popcorn bags.  I had the problems written on the kernals and 10 popcorn bags numbered.  He had to put the write kernals in each bag.  He had fun with it.  Brayden used clothespins on laminated cards to mark the correct answers to problems with multiple factors.

We started working on our human body unit.  We are working on basic bone work for the next few days.  No pictures, most of the week was copywork and reading from some awesome books. 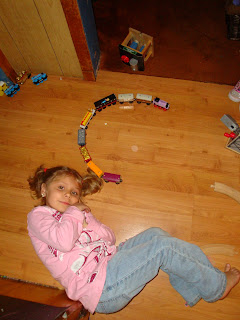 Lydia and Caty decided to play with the trains the other day.  I had our wooden Thomas trains put away in the basement﻿ because Brayden had sooo much Thomas stuff we had to choose what was played with most.  He is still attached to the wooden trains, so I agreed to just store them and bring them out every few months.  Well it's been a couple weeks since we got them out and he's moved away from his Thomas stage again (it's was all the time for a couple weeks..movies and toys).  But Caty and Lydia still have been enjoying them.  Out of the blue Lydia screams, "I MADE A C!!!"  "HEY MOM...I CAN MAKE LETTERS WITH THEM!!"  Maybe some of those phonics lessons are starting to stick!!
﻿ 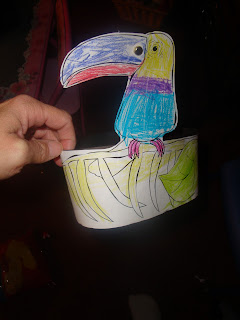 The boys and Lydia are taking a Rainforest class monthly at the local Zoo.  This was Lydia's souvenier from her first class yesterday.  She was nervous, but she had a lot of fun.  When she got there she saw another girl she recognized from another one of her homeschool groups.  It was great!

Next week, we will continue learning about Joseph.  We are going to work on some testing this next week so I can gauge where the boys are landing in their learning.  It's only a partial week due to the holiday.  And we have two days this week we will be selling candy bars for our Special Olympics team in Henry County.  Still have lots to sell.  Starting the week of the 29th we will get started back on full week.  I am also working on getting our workboxes ready.  Yep, I actually bought a tower of drawers from JoAnn Fabrics.com.  Each of the boys and Lydia have a full set.  Nothing for Caty yet, we will get her a set soon.  I worked on creating unique drawer tags for each of them today off and on while I was rearranging our school room area.  None of my measurements worked today...it was very frustrating.  I will post pictures of what everything turns out like:)

Have a great week!!
Posted by MommyKuehner at 8:26 PM