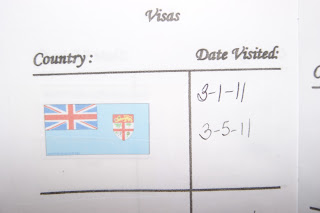 The kids requested FIJI this week.  I think it has something to do with a show they have been watching on Cartoon Network, so we took a break from Erica's Expedition Earth﻿ and I used her curriculum to put together some information on Fiji.  Now this is becoming increasing more difficult as the boys are having difficulty with actual writing of facts.  So I need to fully prepare all their information sheets (at least for the next couple months) while we begin new therapy.  Here's some of the sheets I made.  I also included pictures and facts of animals.  Because we still need to keep working on animal classification. 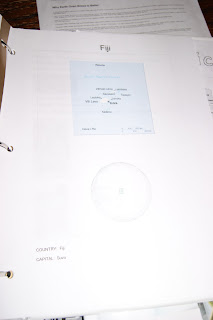 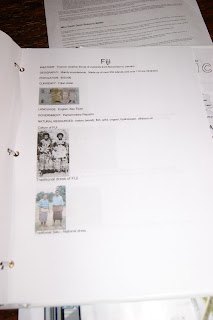 Here's some things we learned:
Animals of FIJI
Blue – tailed Skink ---- When they become frightened they have the ability to pop their tail off and it will continue to wiggle and distract their predator while they run away.

Fiji Flying Fox ---- is the smallest of the fruit bats that live in Fiji.  They have large orange eyes since the fruit bat does not have echo and relies on vision and sense of smell to eat.

Pink Billed Parrotfinch ---- It’s a small bird that has a distinct pink bill and legs.  It looks like a small parrot.

Fiji banded iguana ---- These are considered national treasures and are featured on stamps, currency and phone books.  They hunt for food during the day and sleep high in the trees at night.

Fiji Tree Frog -----  It lives in the low tree areas of the rainforest.  It is the only true frog to undergo direct development in the egg, without a larval stage.
Fiji Land Snail ----- There are over 200 species of Land Snails in Fiji.
We also learned that Fiji exports large amounts of dry coconut, so we decided to try fresh coconut (plus that helps with our Eating the Alphabet wall).  Joey wanted to make coconut bras too...SCARY!!!
Did you know there is actually a website called:  http://www.howtoopenacoconut.com/ ?!?!?!  I thought that was so cool...and well we needed the help! 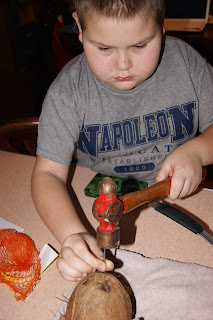 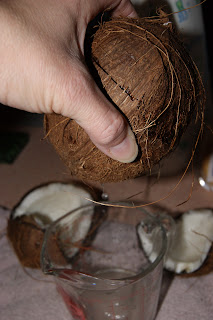 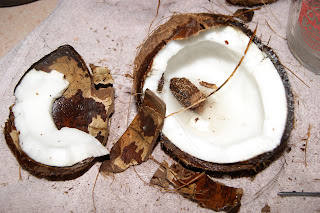 The kids thought using the hammer was cool.  I was scared someone was going to take out my fingers as I was holding the nail.  The fresh coconut was not a huge hit!  But they thought the process was neat.
I also printed a flag coloring sheet from Enchanted Learning. 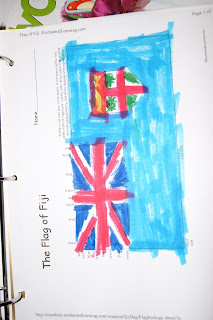 Next we are studying Chile.  And then we will be returning to Europe for a few weeks.  We are expanding Europe.  I thought it would be fun to expand out just a little from Expedition Earth.  So watch for our post on Sunday.  I have finished our first Montessori Continent Box to cover Europe.
Posted by MommyKuehner at 6:47 AM

Email ThisBlogThis!Share to TwitterShare to FacebookShare to Pinterest
Labels: expedition earth, Fiji, how to open a coconut