Lydia has been taking horse riding lessons since January 2010.  We took about 4 months off this winter because of overwhelming schedules and she decided to try ice skating.  Joey and Brayden took lessons also, and Brayden decided he didn't care for it.  But Joey was on the fence.  He started asking about riding lessons again, but between LEGO club, Basketball and everything...well my head was spinning.  Since we LOVE the Special Olympics program in our county soooo much, we let him sign up to the Equestrian Team.  He started last night. 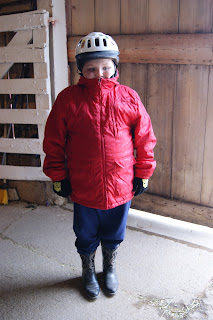 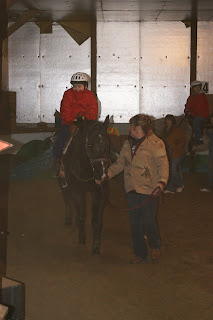 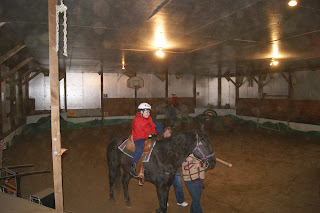 He actually calmed down and did really well.  He was actually having a manic episode during the day....the psychiatrist got to see a small amount of it.  It was really a long day for both of us.  He had actually been up 17 hours at this point.  He got up at 2 am and wouldn't go back to sleep.  I was really hoping it would calm him down some, but he was still having issues when he got off the horse.  He'll be doing it weekly at least the next month and then bi-weekly after that.  The expense will get a little much for us otherwise.  I still have hopes that it will have a calming effect on him yet!!
Posted by MommyKuehner at 8:59 PM