Our artist for Co-op in October was Claude Monet. 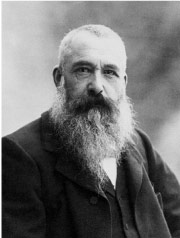 Caty started her massive sensory issues this  month, so she decided that reading was ok....but no extra projects right now.  So mainly Lydia and I did some research on Monet.

Monet became known as an "Impressionist" - a title derived from his painting, "Impression, Sunrise ". The work has an unfinished look, which was very different from the paintings of artists who lived before him. The brush strokes were lively and spontaneous, capturing the feeling of the moment. He said, "Landscape is nothing but an impression, and an instantaneous one, hence this label that was given us, by the way because of me."

In his later works Monet continued to capture the affect of light. Sometimes he would paint the same object over and over again, but at different times of day or year. Examples of these works include his haystacks, morning views of the Seine, the Gare Saint-Lazare, Poplars, the Thames, Rouen Cathedral, and his celebrated series of water lilies.

We talked about caricature drawings, but Lydia was mainly interested in the watercolor look of Monet's art.  We were privileged to see several pieces of his work at the St. Louis Art Museum, and she knows Monet as the "Water Lily guy"...but it's one of her favorites.

She was feeling inspired while watching the newest Disney Fairies movie one night, so she decided to incorporate fairies and re-create a Monet piece.

Our insurance agent gave us some old desk calendars, so they have been working perfectly for art work.  She used watercolor pencils to create this work.

First she copied her art, and added the fairies.... 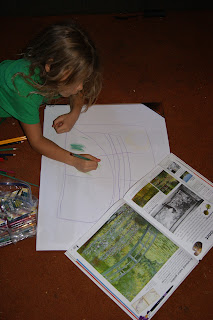 Then she added water. 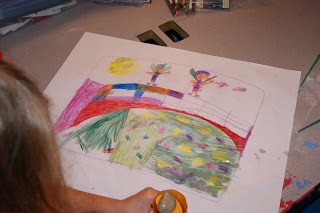 The effect was not what she wanted and she has decided that she currently does not like to use watercolor pencils, she much prefer using water color crayons.

Our November artist is Albert Bierstadt.  Check in next month to see all our fun activities to go along with him.