Just as we left a snowstorm behind in Connecticut, we were driving toward another.  It wasn't the same strength, but still something to be concerned about.  But alas, our next location to be was Madison, Wisconsin.  We had been there before and saw everything we had wanted to see, so the kids and I just planned on vegging at the hotel during the week.  There was an indoor pool and hot tub, so we knew we would be fine.

We were very excited though to get a chance to meet one of my fellow Crew Mates.  She and her family live north of Madison and traveled down to meet us in Madison.  We got to spend a couple days together (sort of snowed in), hanging out and swimming.  It was nice to relax.

Here's a pic of Stacie and I 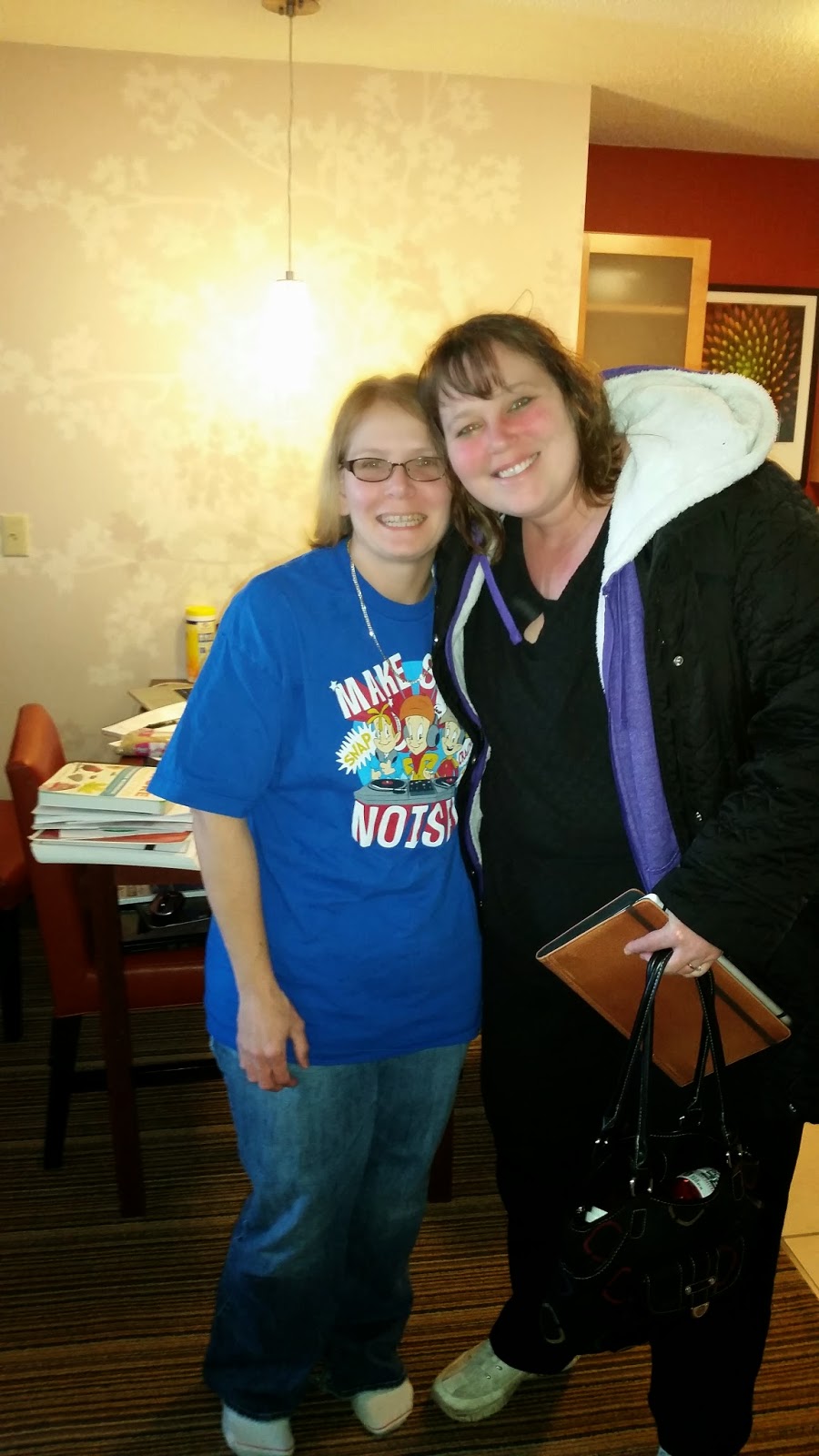 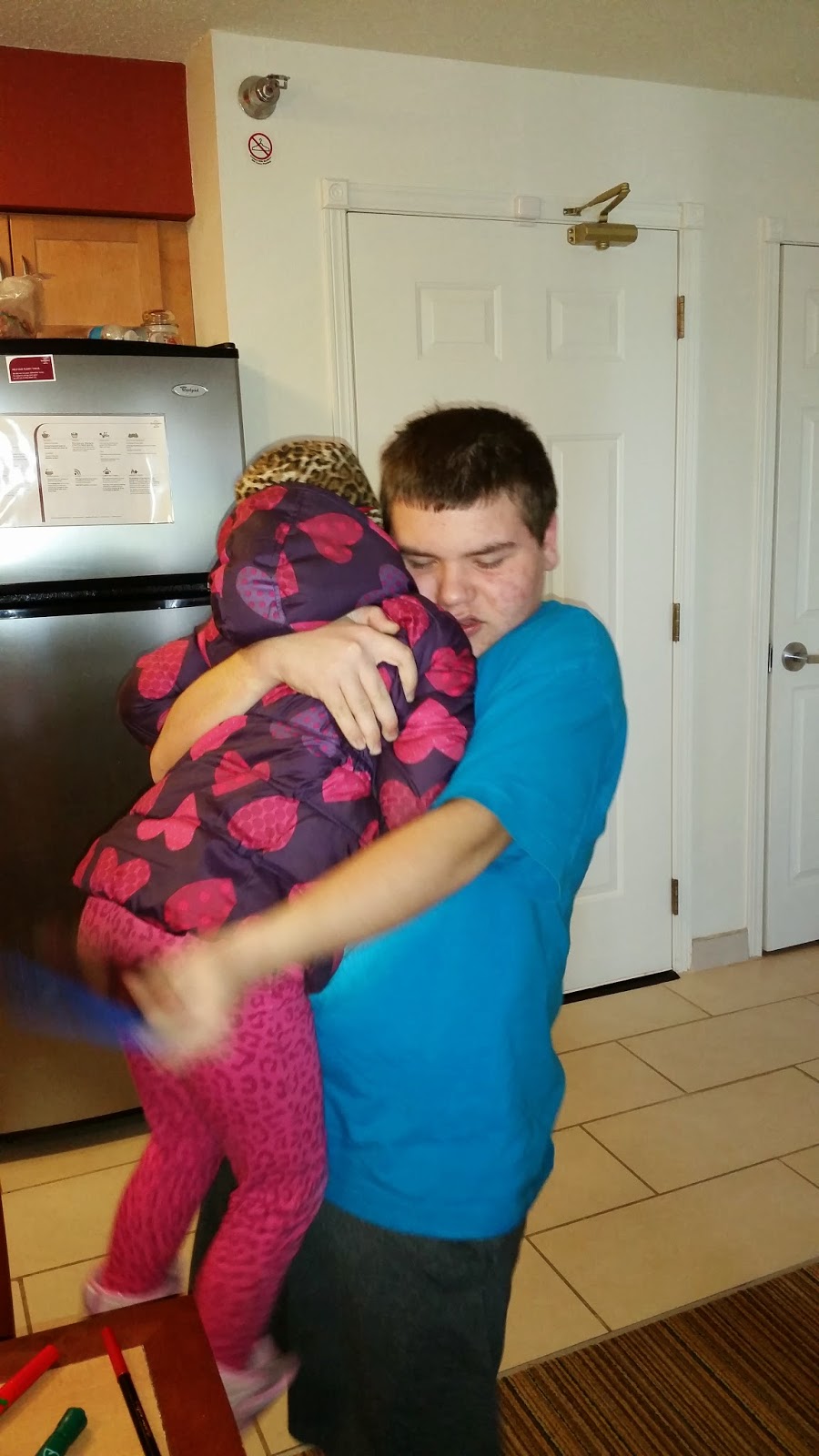 It got cold in Wisconsin too.  Very cold.  By the time we left on Thursday, it was below zero for the temp.  Yuck!!  I openly admit I am a cold-weather wimp.  Since I got sick a couple years ago, My body doesn't handle it well.  We only really left the hotel once during the week.  We went to Barnes and Noble because Lydia finished her Who was Annie Oakley book and wanted to read Who is Jane Goodall.  She doesn't like to read on tablets, and so we headed over.  We LOVE the Who was/is? series of books.  And the selection is unbelievable.  She studied Jane Goodall a couple years ago, but still loves to read books about her.  So I figured, why not.  She's reading!!!

I bought the Build Your Library Grade 1 curriculum last week.  I was looking to combine the girls on a few subjects.  So we now combine history, science, and literature together.  They do separate math and reading.  Even though Lydia is technically 3rd grade, I wanted to start with ancient world.  So I will just up her questions and requirements.  She also will continue her spelling program.

Lydia continued her study of the United Kingdom this week.  She made two themed meal items this week.  One was a triffle recommended by our friend, who recently was living in the United Kingdom. Lydia made a layered orange dessert.  But she left out the pudding so that Joey could eat it, and only added whipped cream to those who wanted it.  It was a hit during our family Bible study time.  We studied about Moses this week.  Next week we will be learning more about the 10 plagues of Egypt. 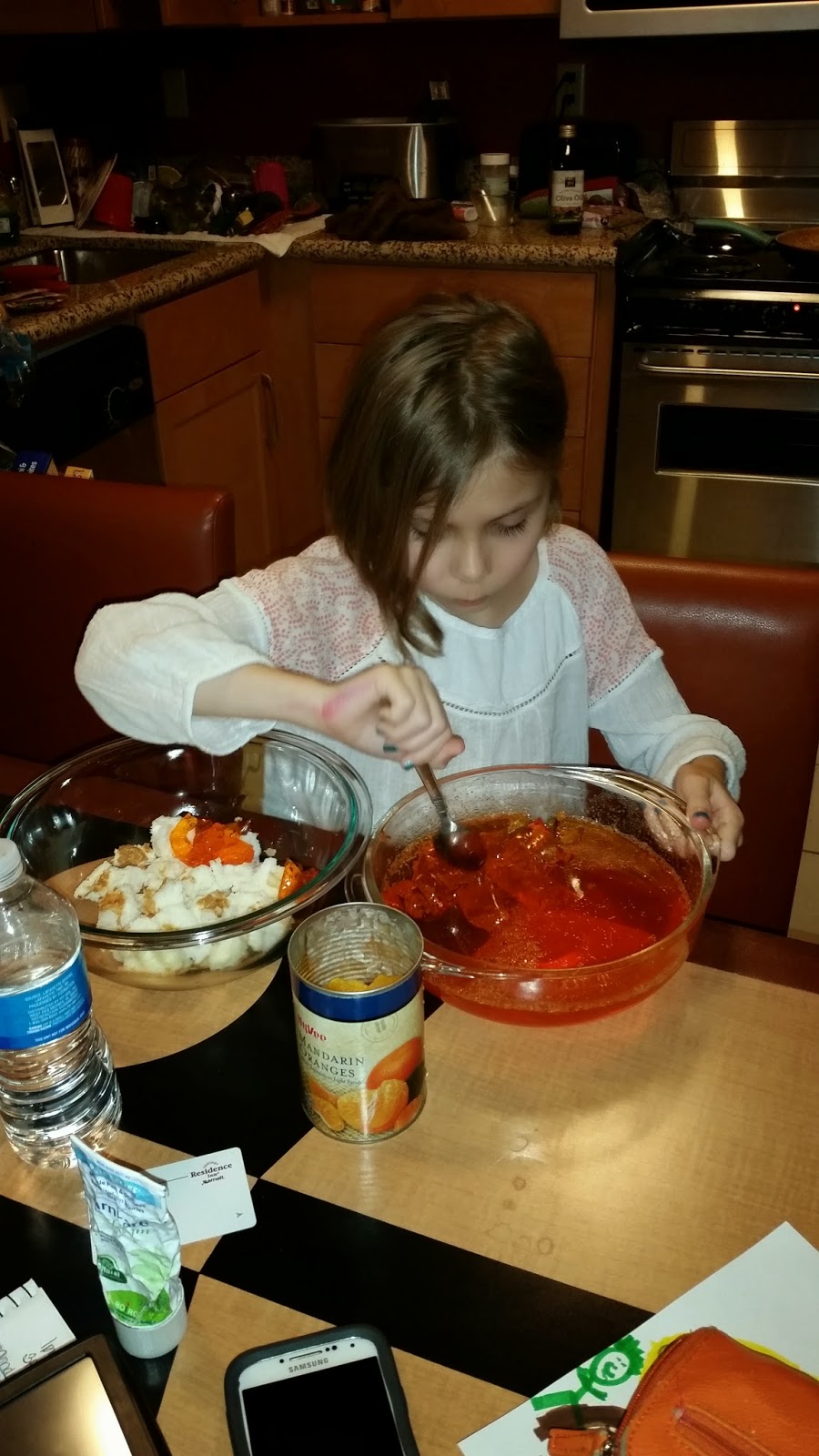 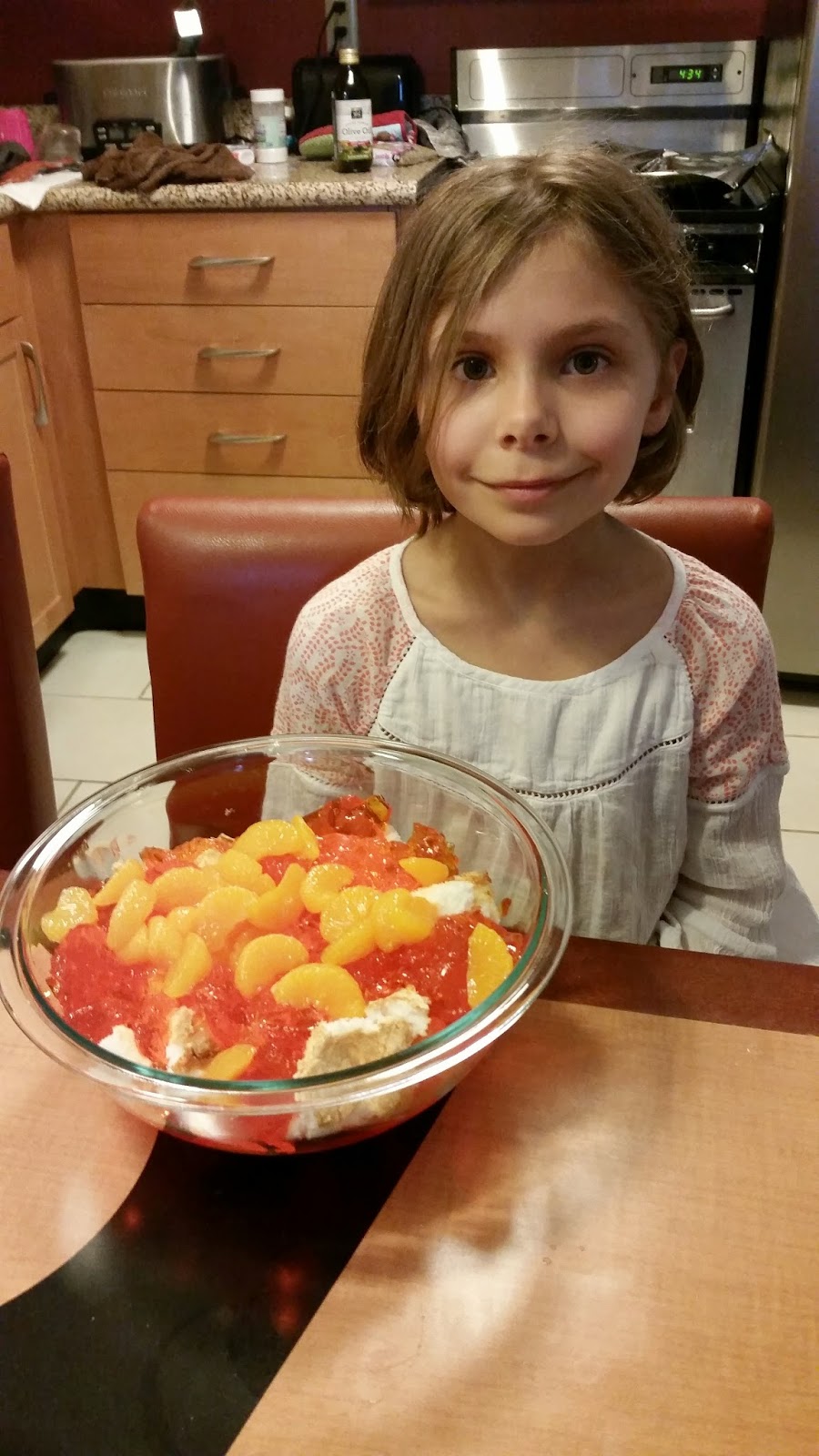 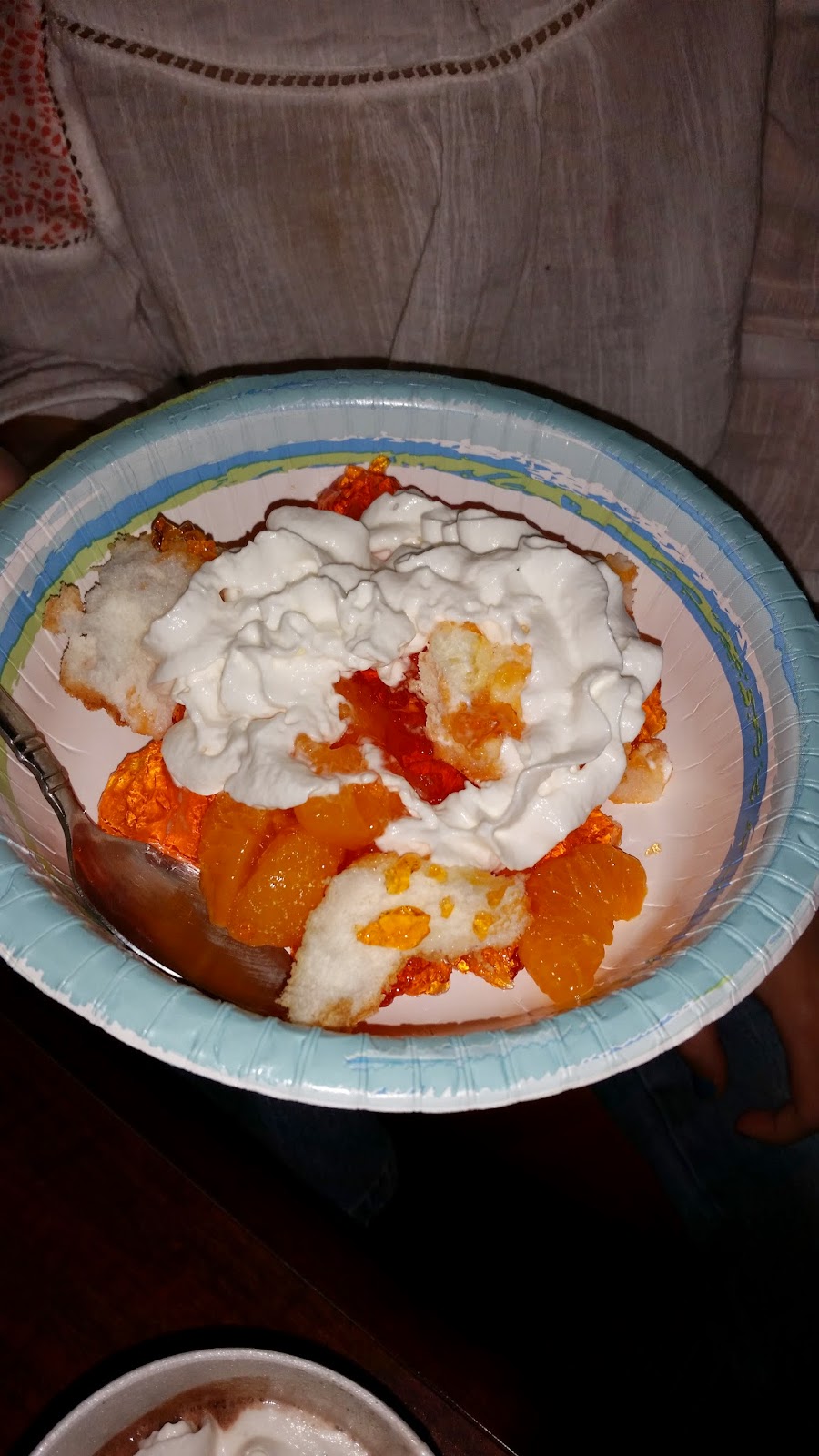 With help she also made Parsnip topped shepherd's pie which we found on a United Kingdom recipe website.  We made adjustments, but it was very yummy! 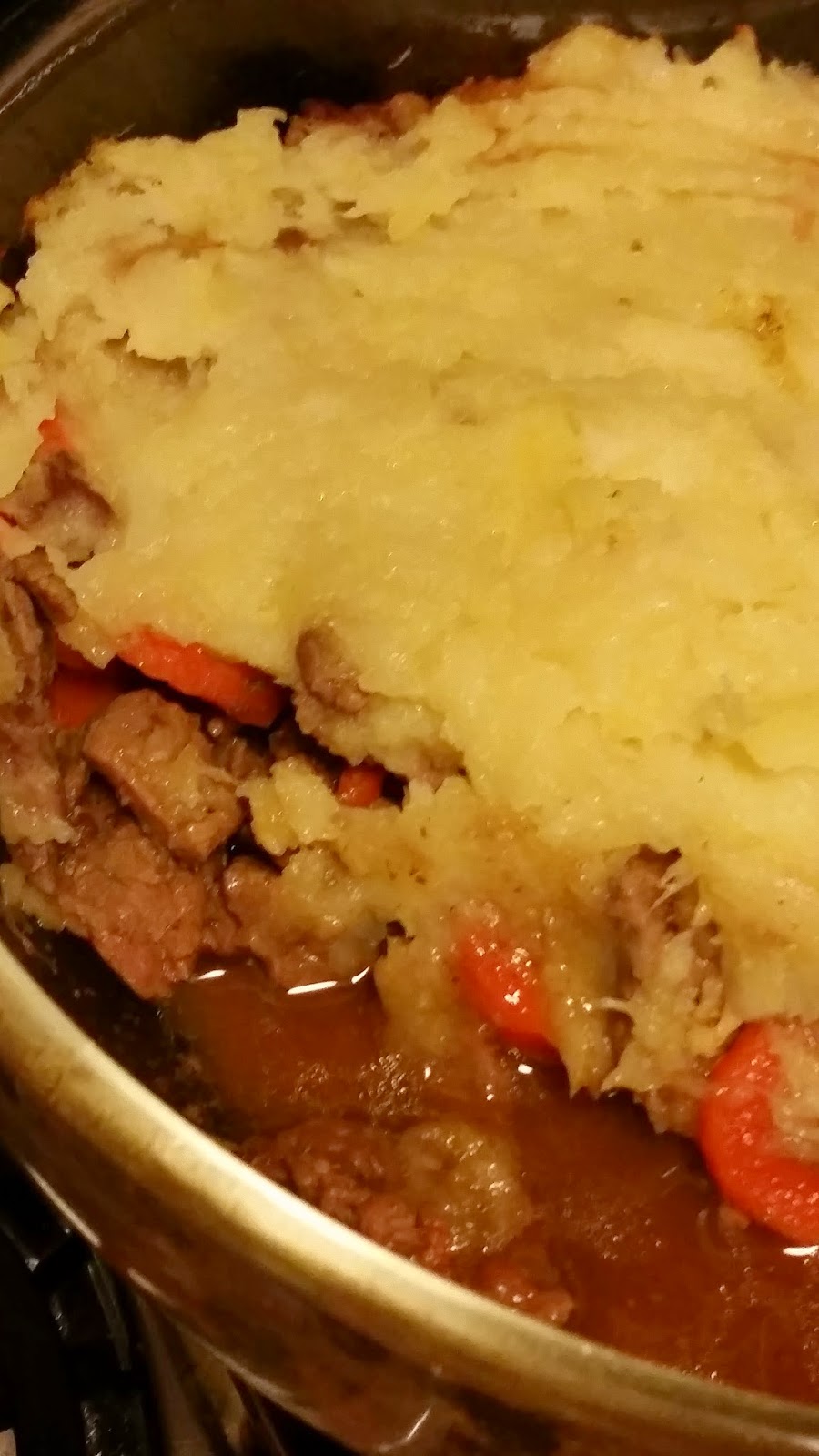 I think the Build Your Library is going to work for me.  It is basically laid out, and I just make adjustments to our schedule and what we are doing.  I made adjustments for science this week, since we are reviewing a great new program called Visual Learning Systems (watch for the upcoming review).  I was able to still follow their recommended course of study and make a few adjustments.  Same for the Literature since we really on went to school 3 days this week, I made a few adjustments since the curriculum is written for a 5 day a week schedule.

This week we worked on a family tree, but not just any family tree. Both girls had made a family tree recently for another project, so this time I had them try and draw pictures of things that our family is about.  Things like traveling, exploring, Minecraft, watching movies, playing games, and doing crafts.  Cooking too...I gave them ideas.  But neither was in a creative mood, so we did more talking than creating that morning.  We also talked about archaeologists and we watched the video on Youtube from the National Park Service.  When we were at Mount Vernon in the fall, we were able to watch a small group of archaeologists work outside of the kitchen area. 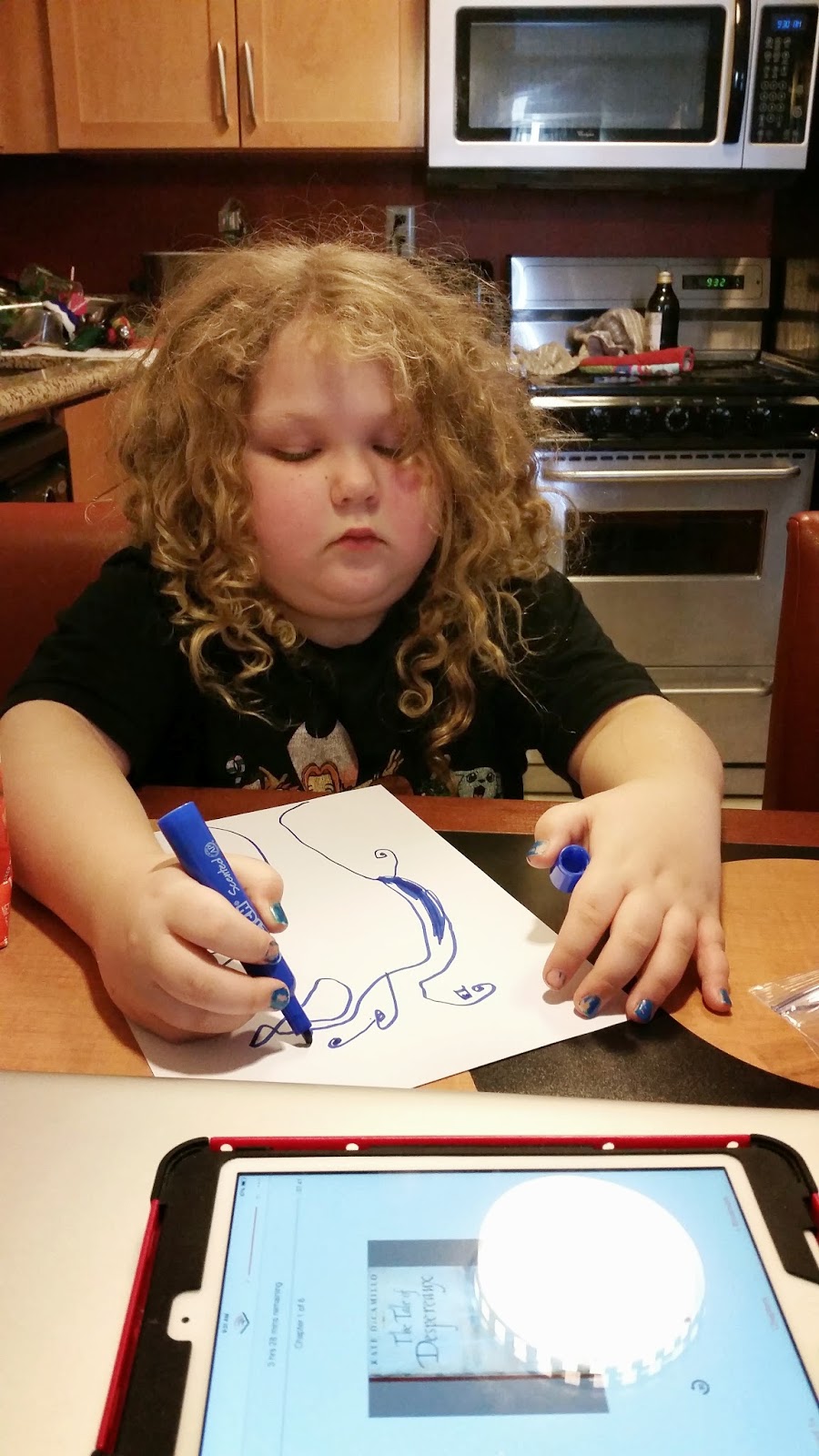 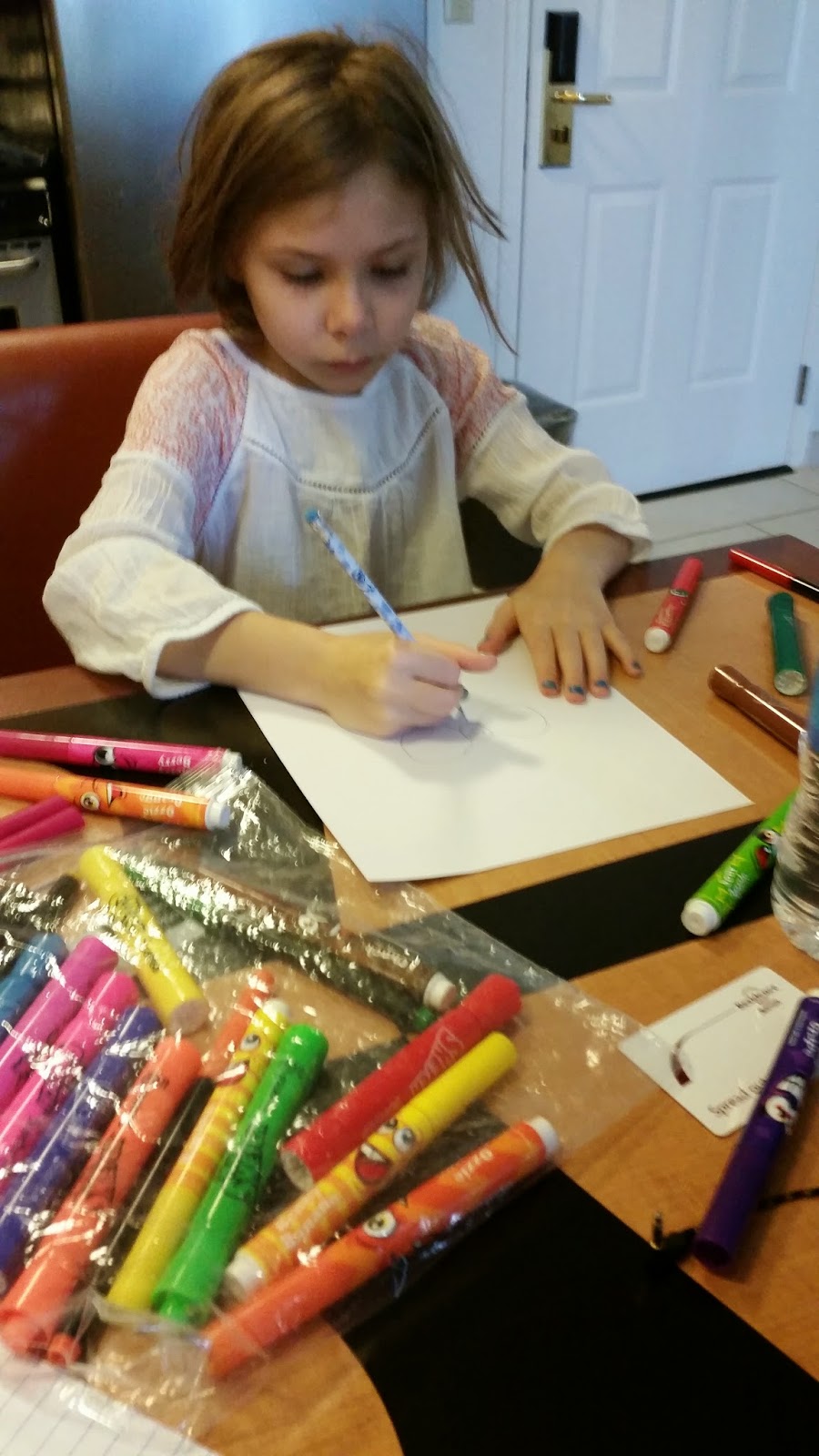 In science they are learning about the animal kingdom.  This week we learned about birds, fish, and what living things are (not in that order).  Their literature is the Tale of Desperaux.  Lydia really seems to be enjoying this book.  I don't think Caty is though.  We'll watch the movie when we finish it.

For their art project this week, we learned about Fish on Wednesday.  So while they were listening to their Tales of Desperaux chapters on audiobook, I had them create a fish tank with card stock and origami paper.  It gave the paper a paper collage look.  Very neat. 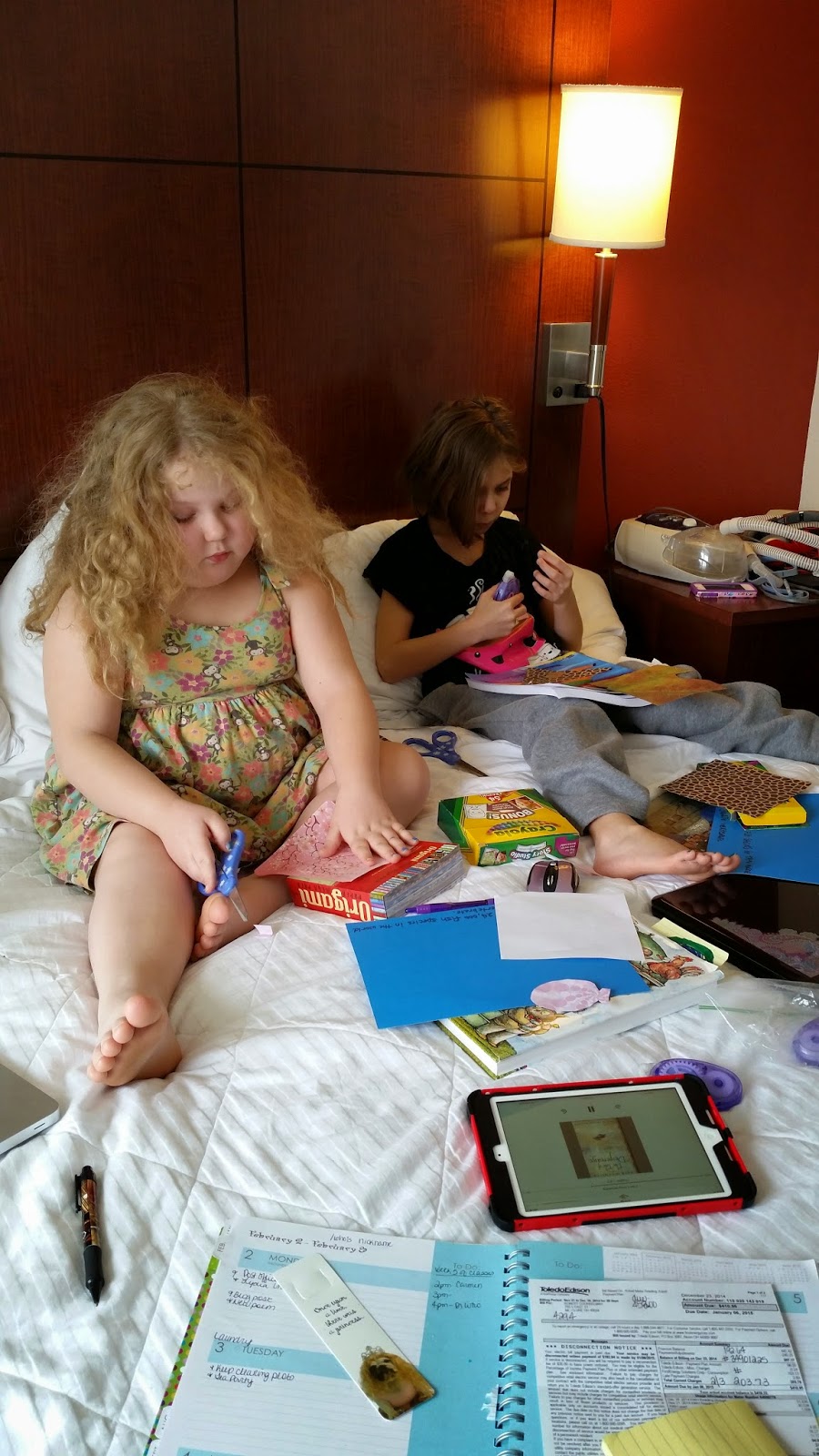 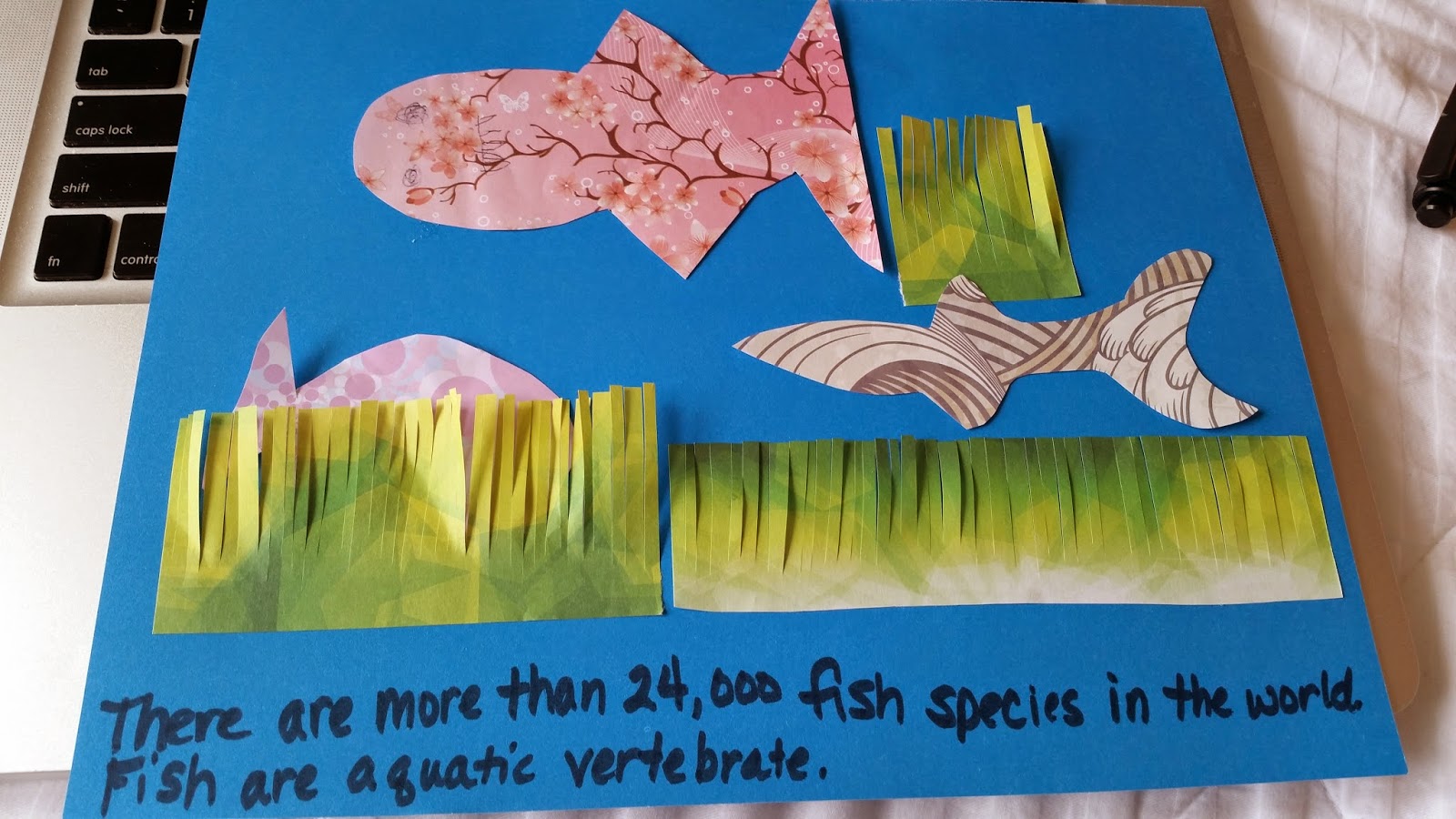 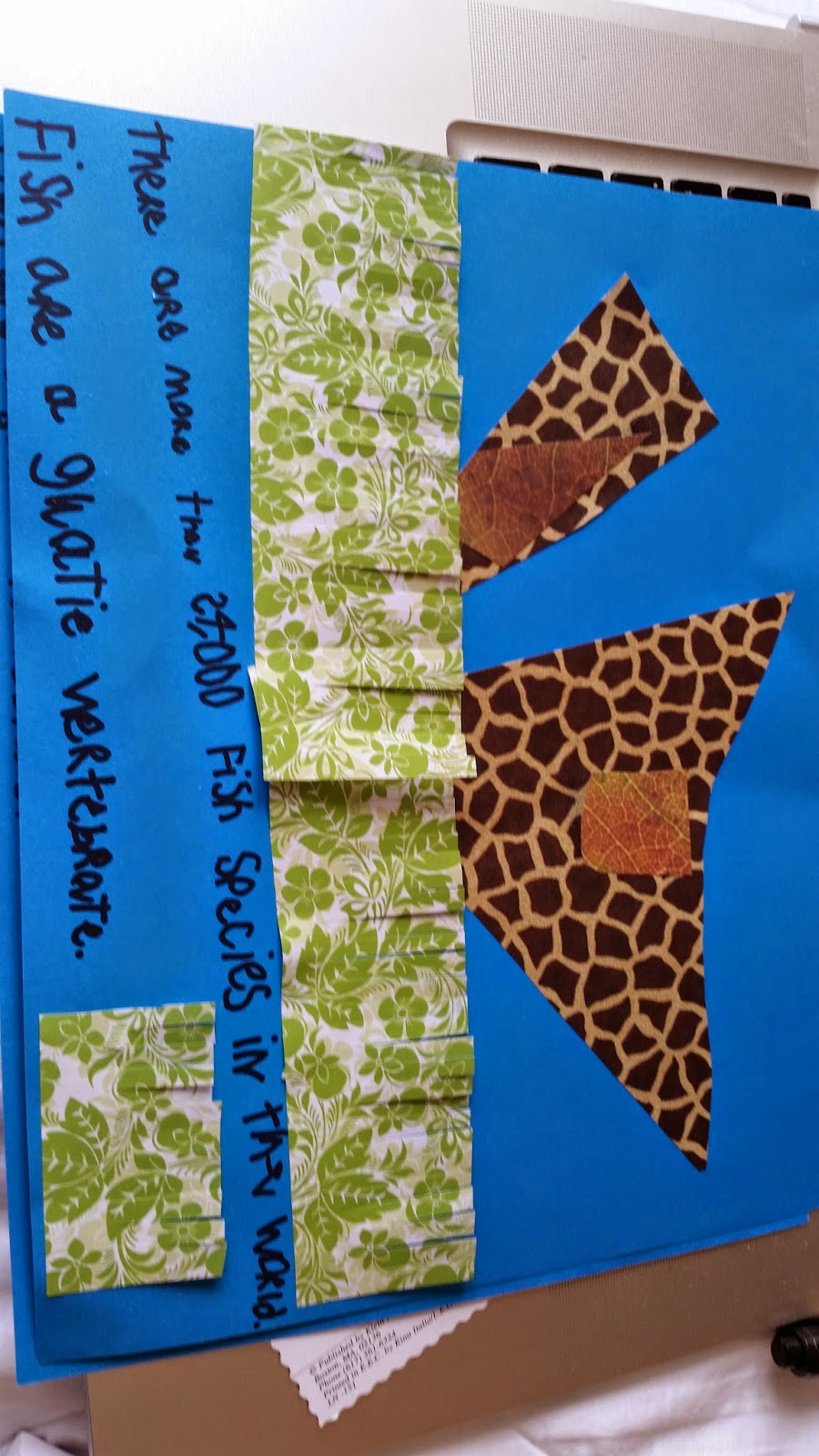 Joey and Brayden worked together to do their science this week.  Both of them are in the same science level.  I only bought one textbook though, so they need to share it for reading.  Usually they work separately and switch back and forth.  But this time, they read their assignment together.  They took turns reading paragraphs to each other.  It was totally their idea.  I heard them reading in the next room and had to snap a picture. 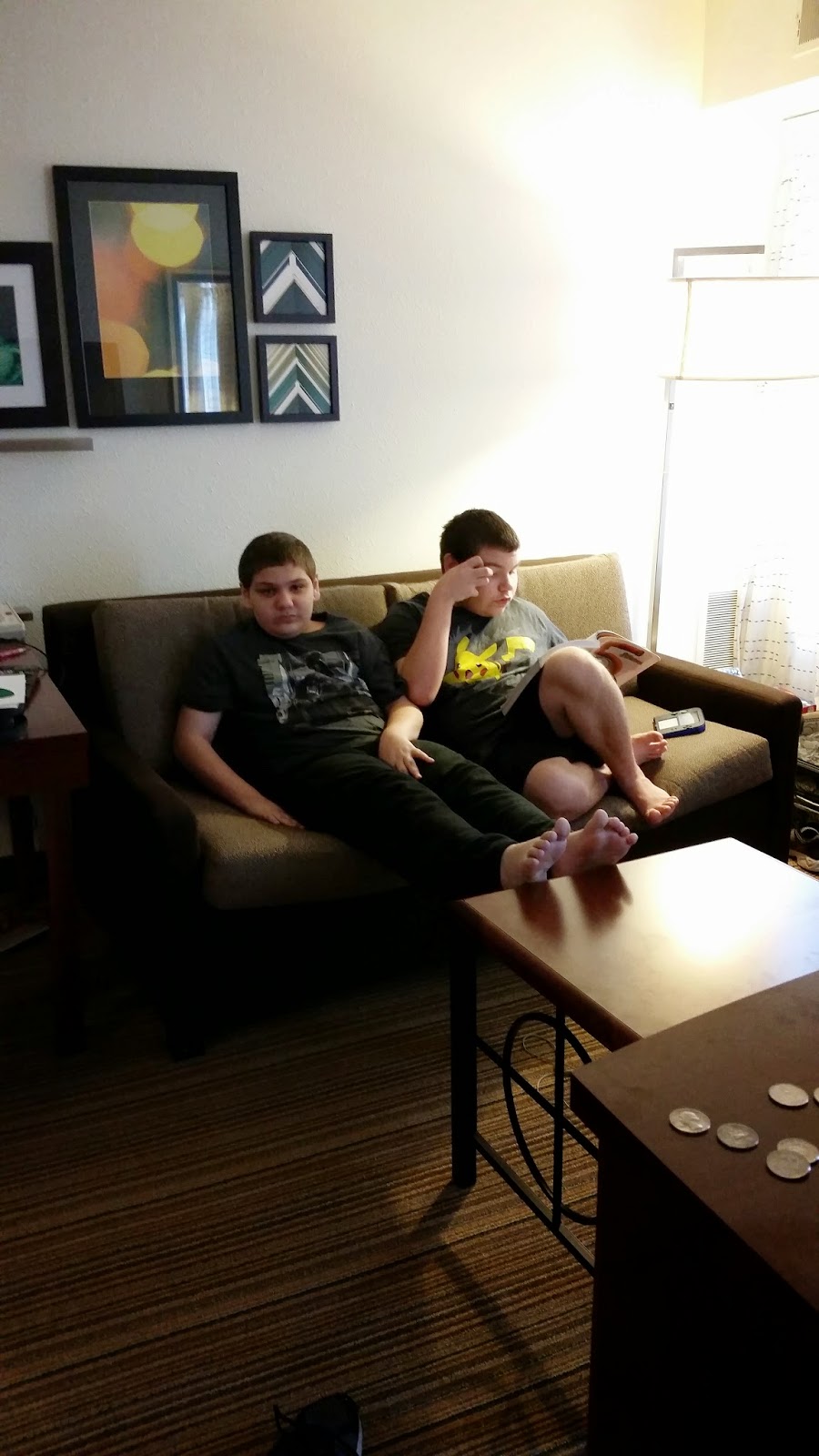 Brayden is working on Fractions.  Not my favorite subject in the world.  Sometimes he seems to get it, while other times he struggles.  I am not sure how to help him on some problems, because he insists on doing the math in his head and not write out his work.  So it makes it harder for me to explain where he messed up.  I try to write out all the steps every time I am helping him.  He is working on topic sentences in paragraphs, and he is supposed to be writing a paragraph.  But life got away from me, and we didn't get that project started.  Plus he will do better typing those than writing.  He is doing great at reading his Magic Tree House books.  So I am grateful for that. 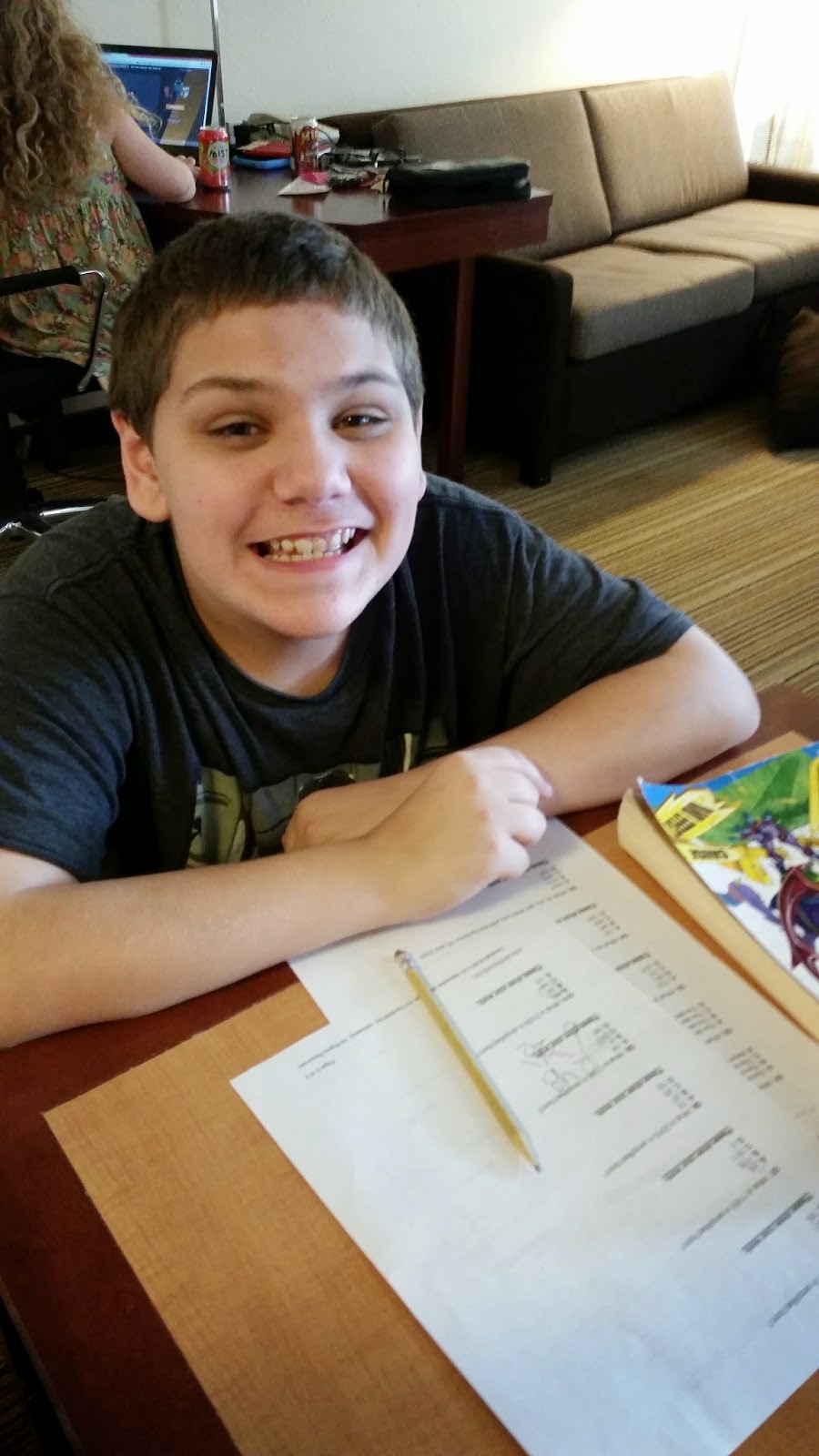 Our poetry time was fun this week and we read poems on January and snow.  The kids picked one out that we will be typing up and sending out next week to our friends.  We have a huge stack that my sister-in-law forwarded to us.  So next week's poetry is going to be a lot of fun.  This week they had hot cocoa with whipped cream and some premade cookies I found at Hy-Vee.  Joey had hot apple cider. 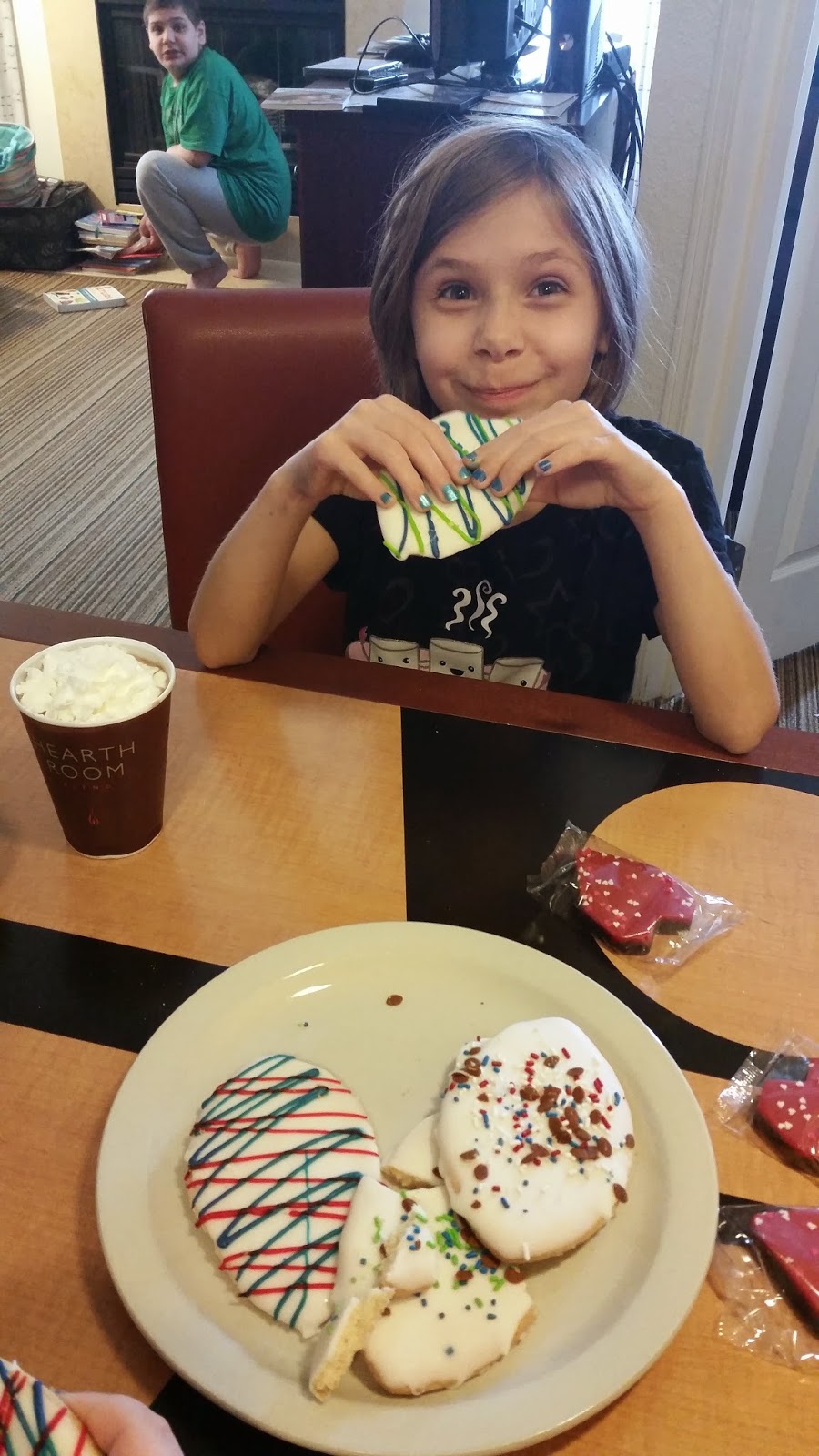 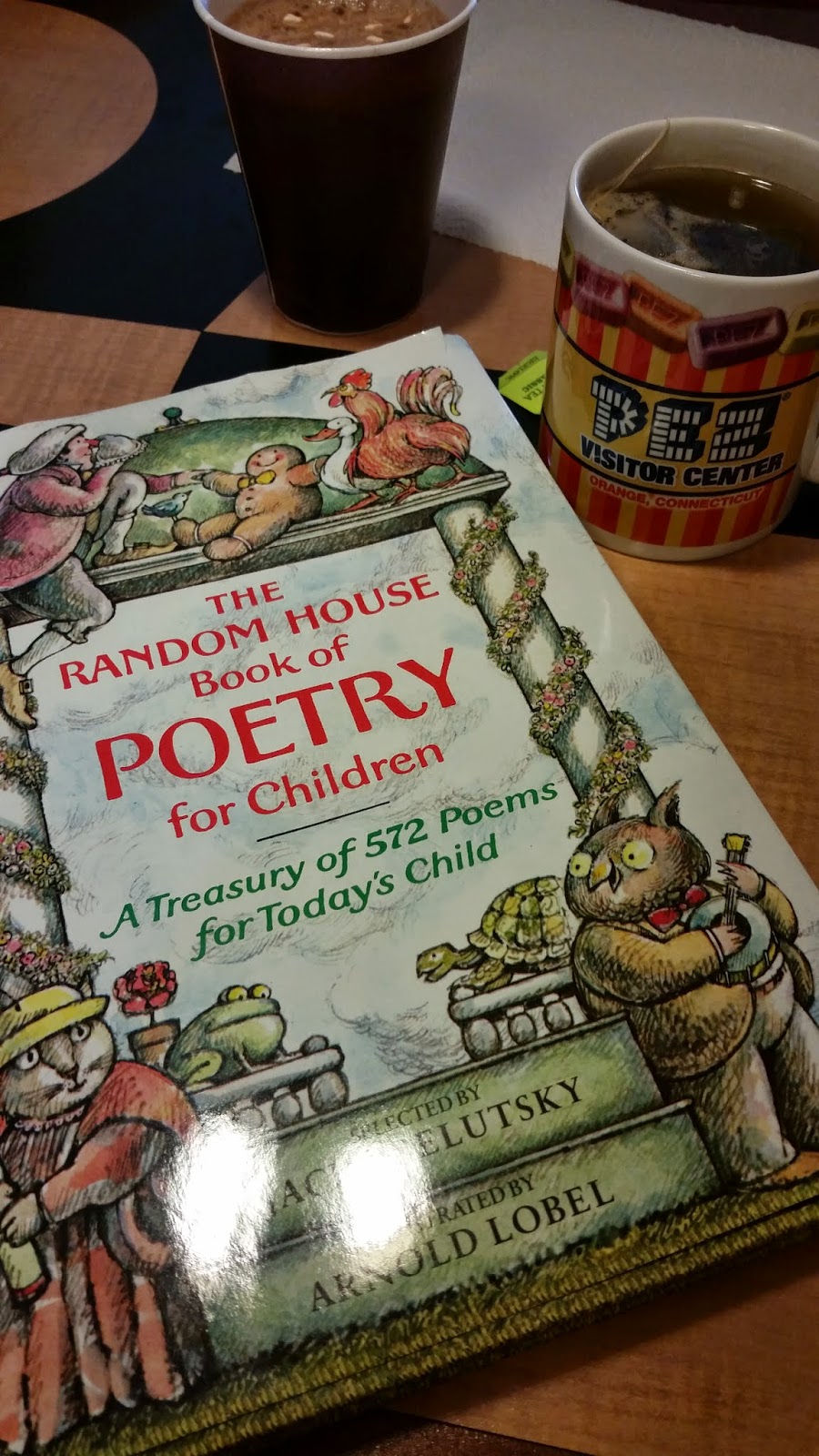 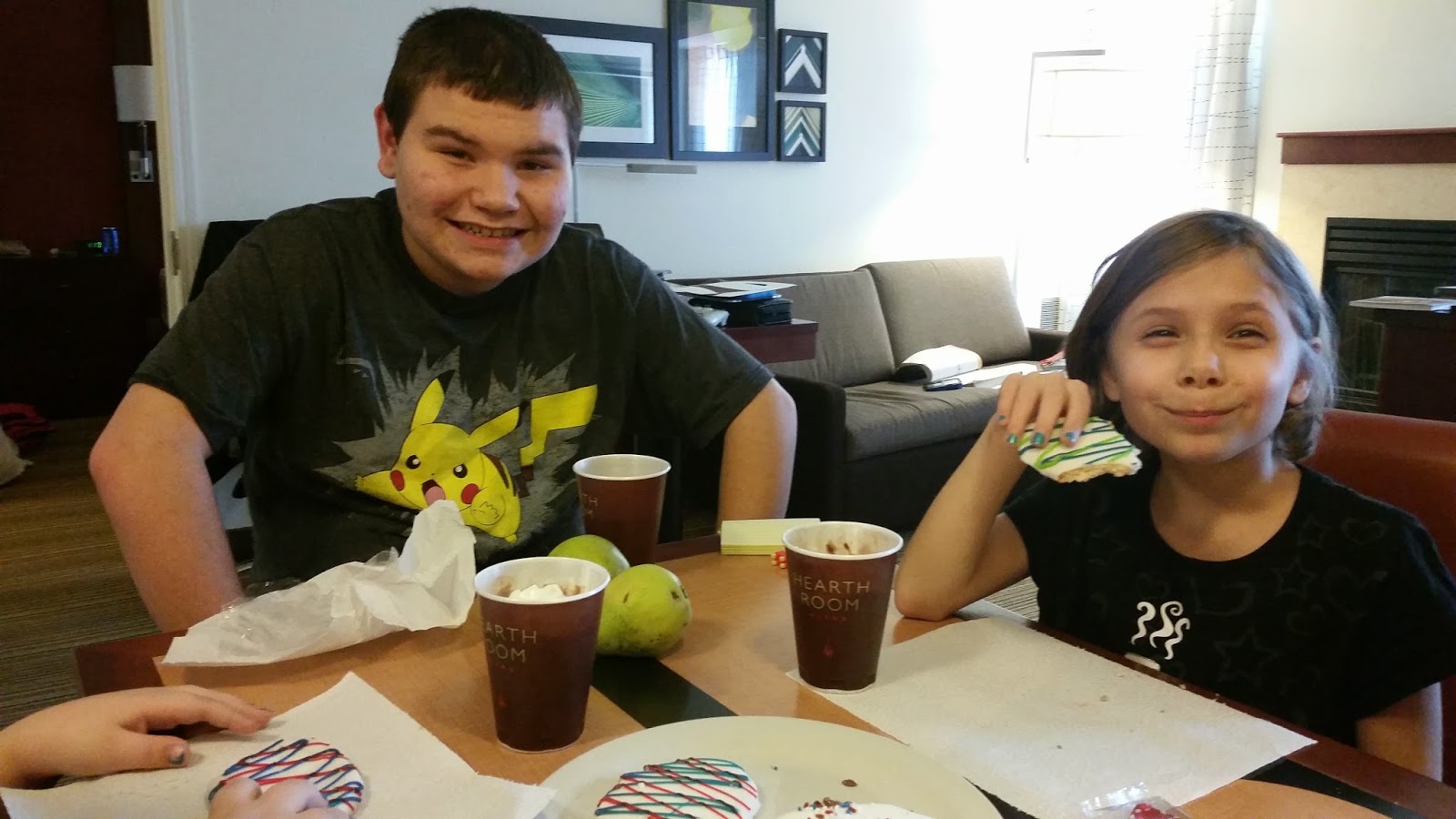 Lydia finally worked on a project that a friend sent us with a poem.  She sent paint samples and the kids were to create metaphors and similes.  Lydia had a lot of fun with this one. 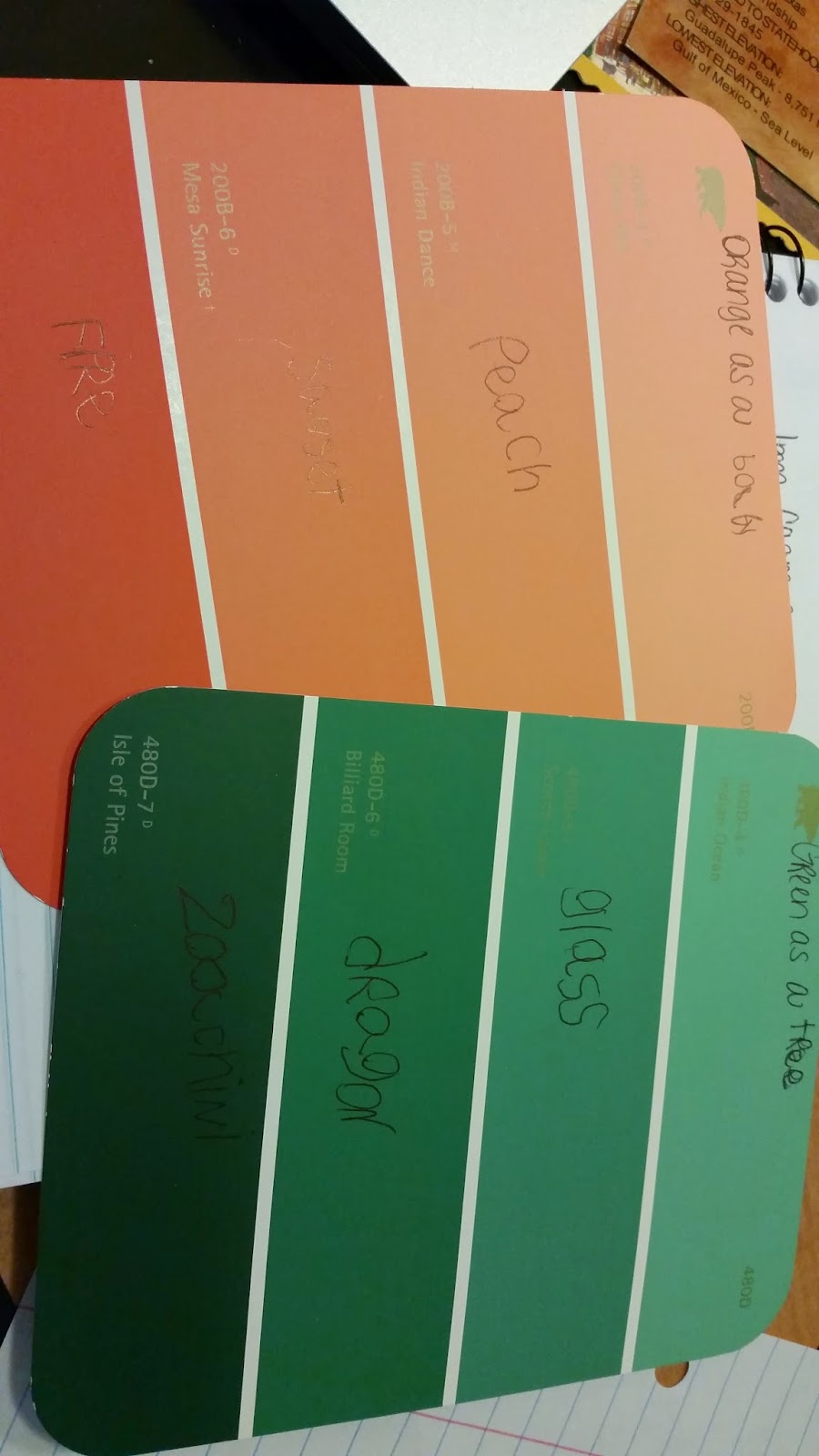 Some other shots from our week:

Of course we had two snowstorms this week.  The one Saturday night into Sunday was heavy blowing and drifting of fluffy stuff.  And then had another on Tuesday hit on Joe's way home from work. 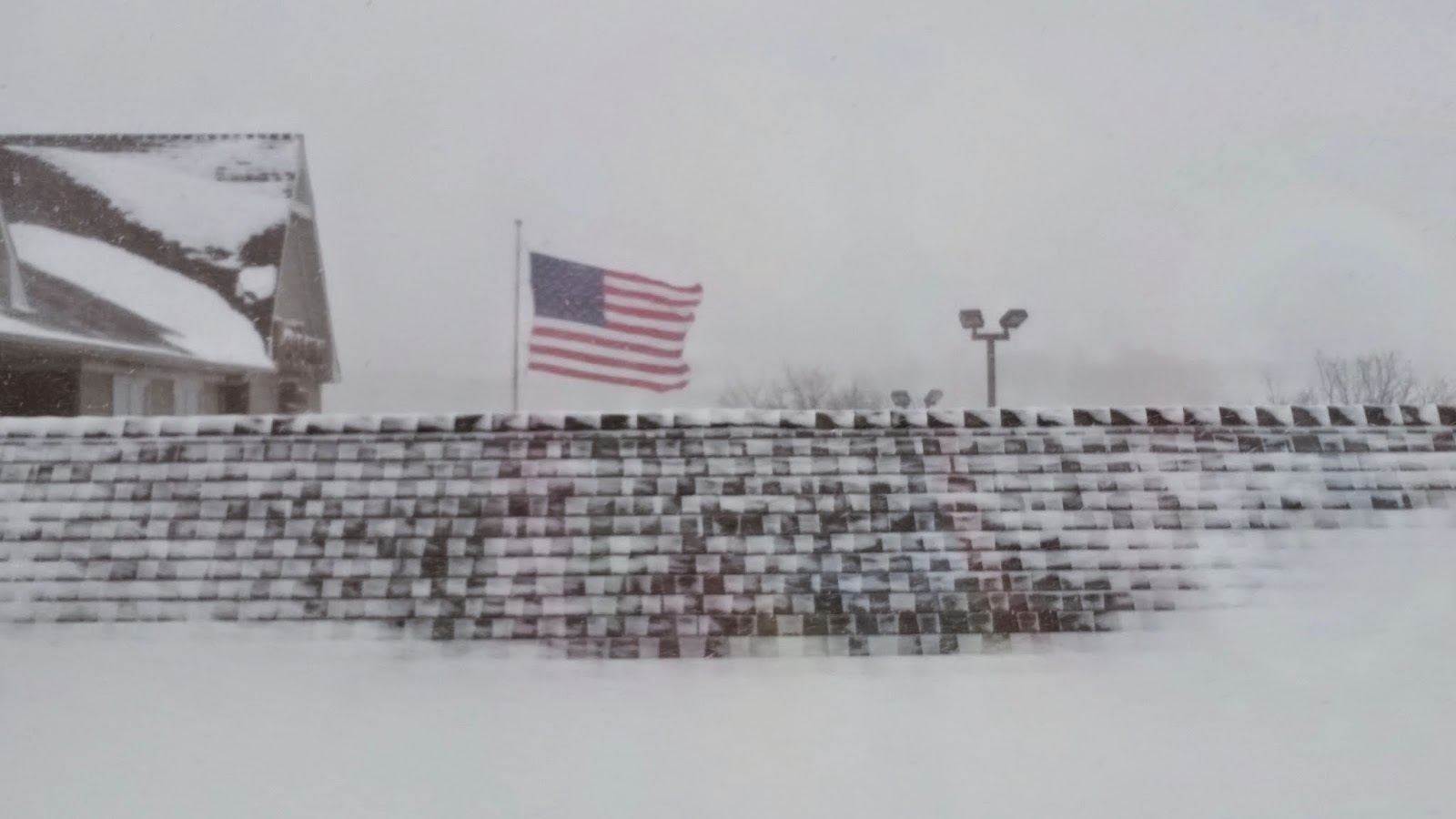 Caty working on her Reading Eggs. 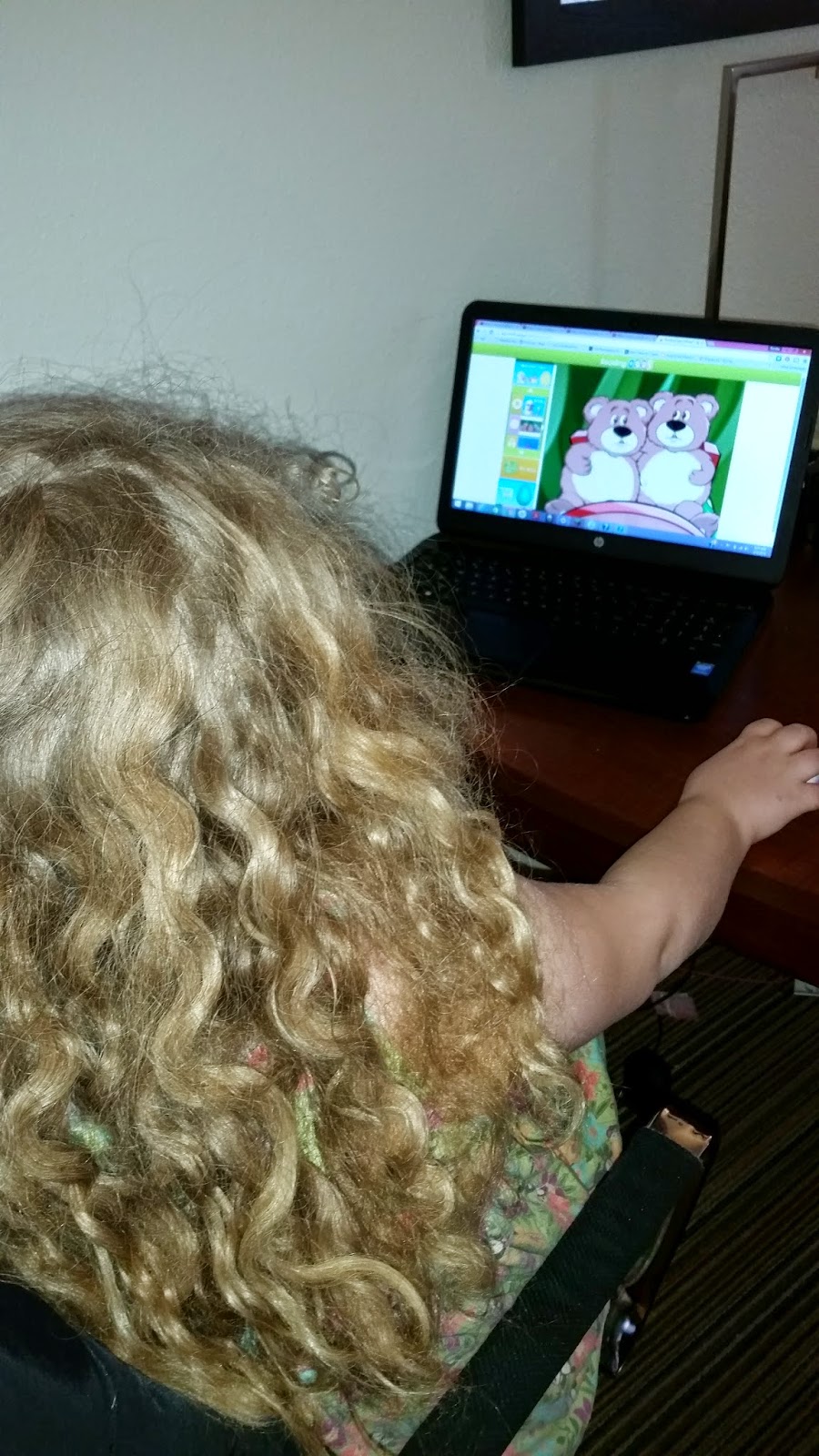 Lydia is using Always IceCream as some fun when I am working on stuff with Caty or the boys. She seems to like it so far.  We reviewed it a few years ago, and enjoyed it then.  But now she can read to play the games herself.  So we'll see how it goes. 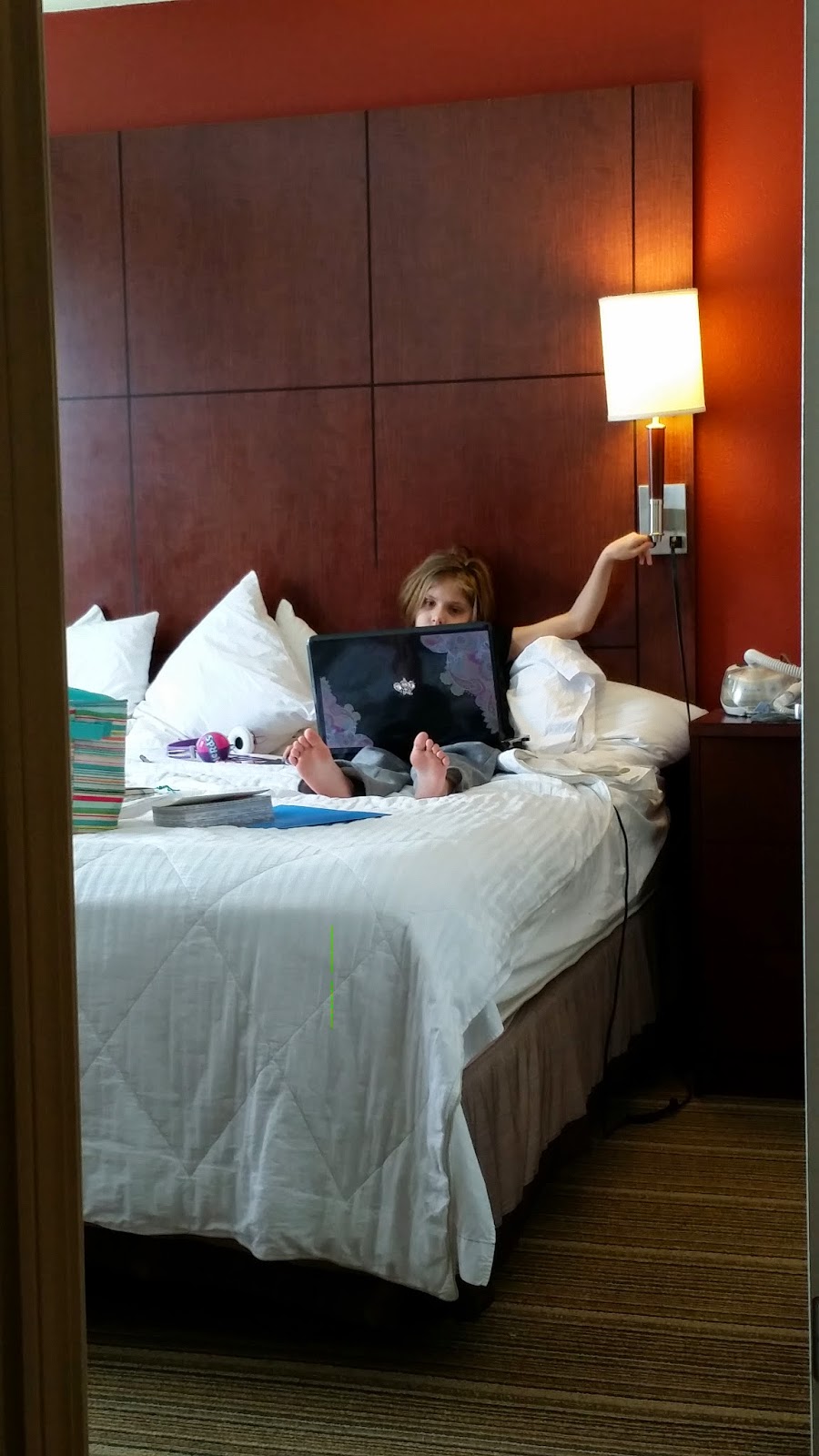 Joey was tired, and fell asleep on the couch on Wednesday during classes.  It was then followed by two hours of a minor manic episode and I was the brunt of the blows.  Oh well....we survived it as always. 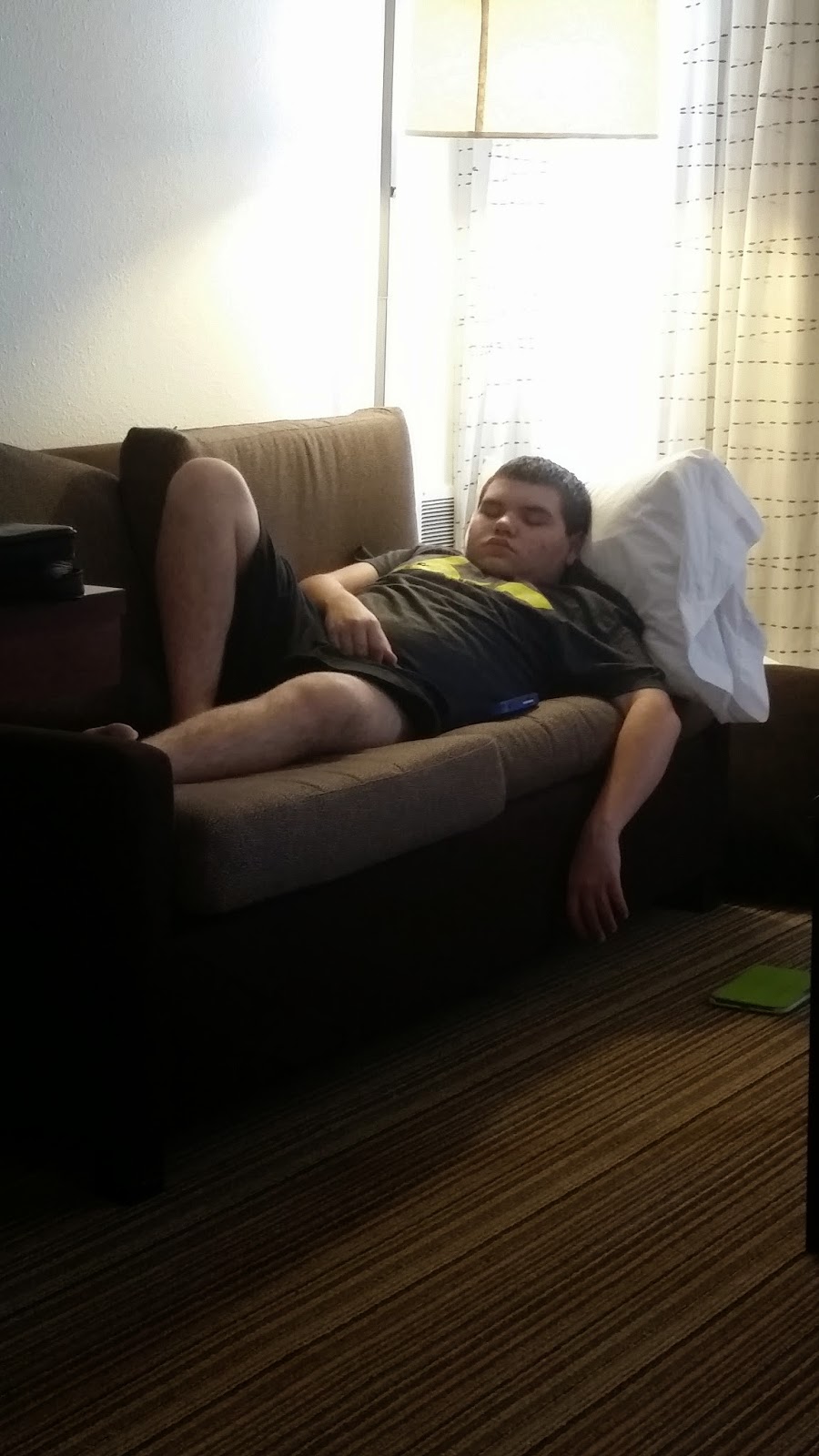 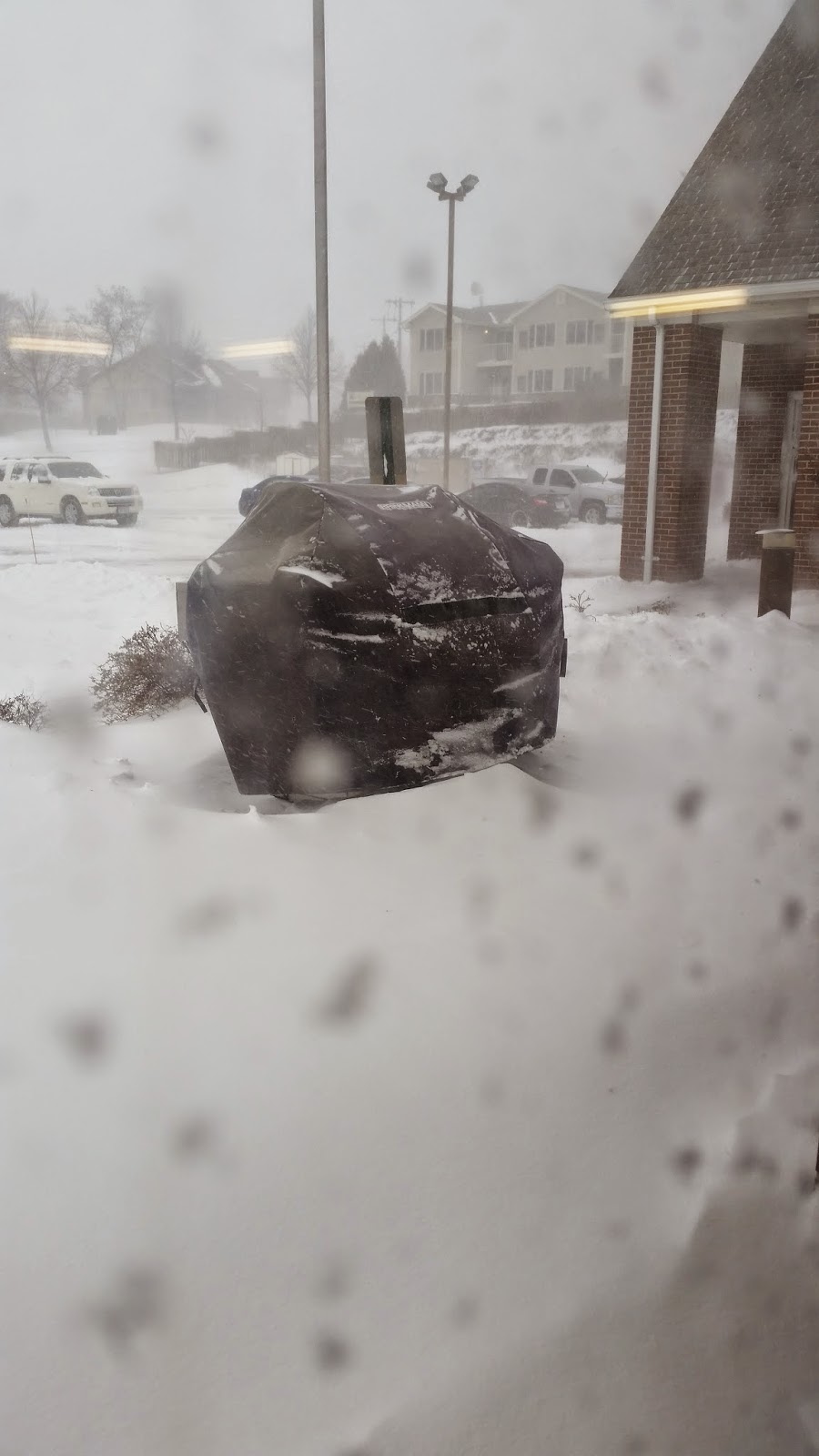 Lydia working on a map of the United Kingdom for her project. 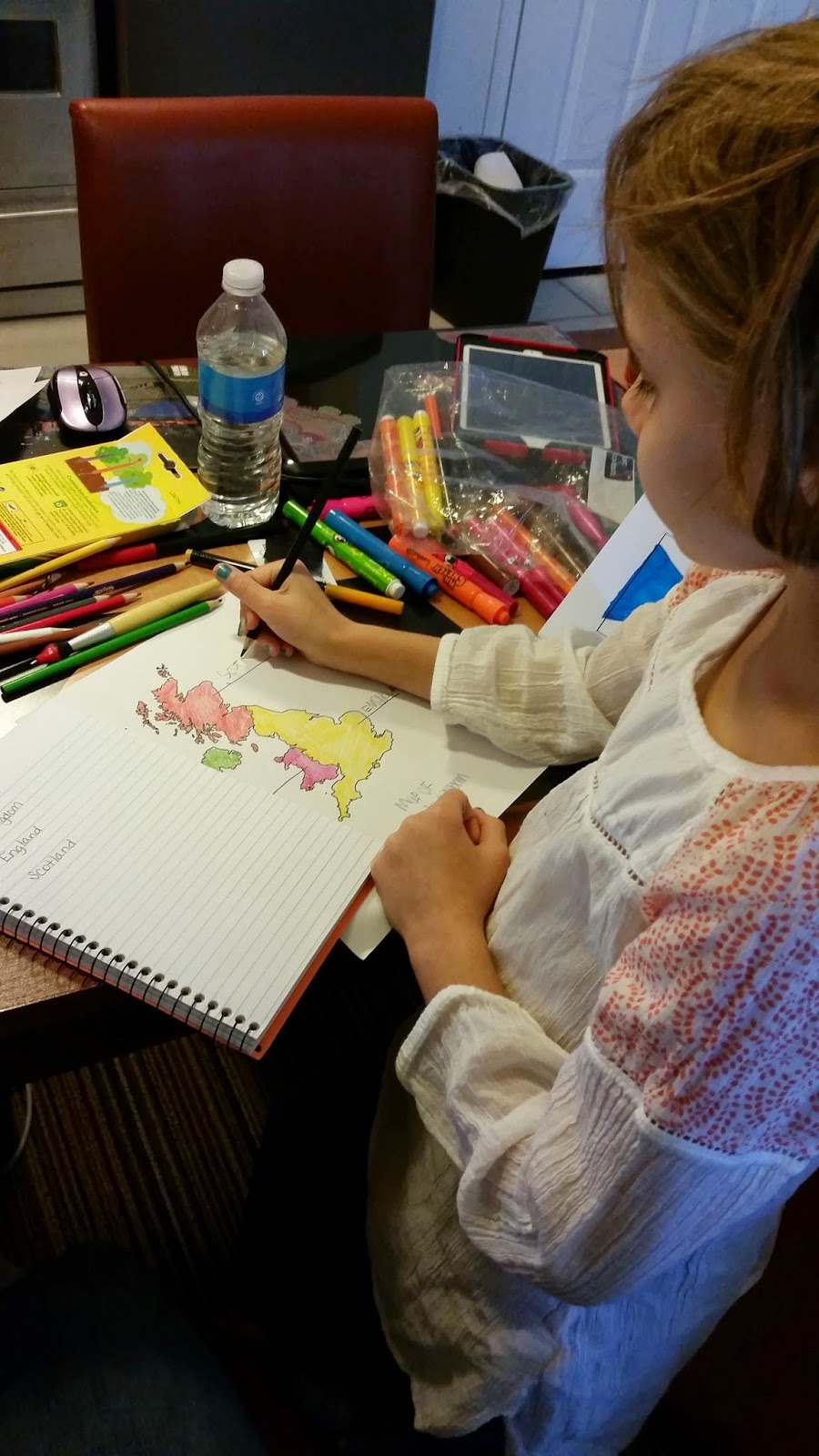 Caty drawing what she thinks Desperaux looks like from the description in the book. 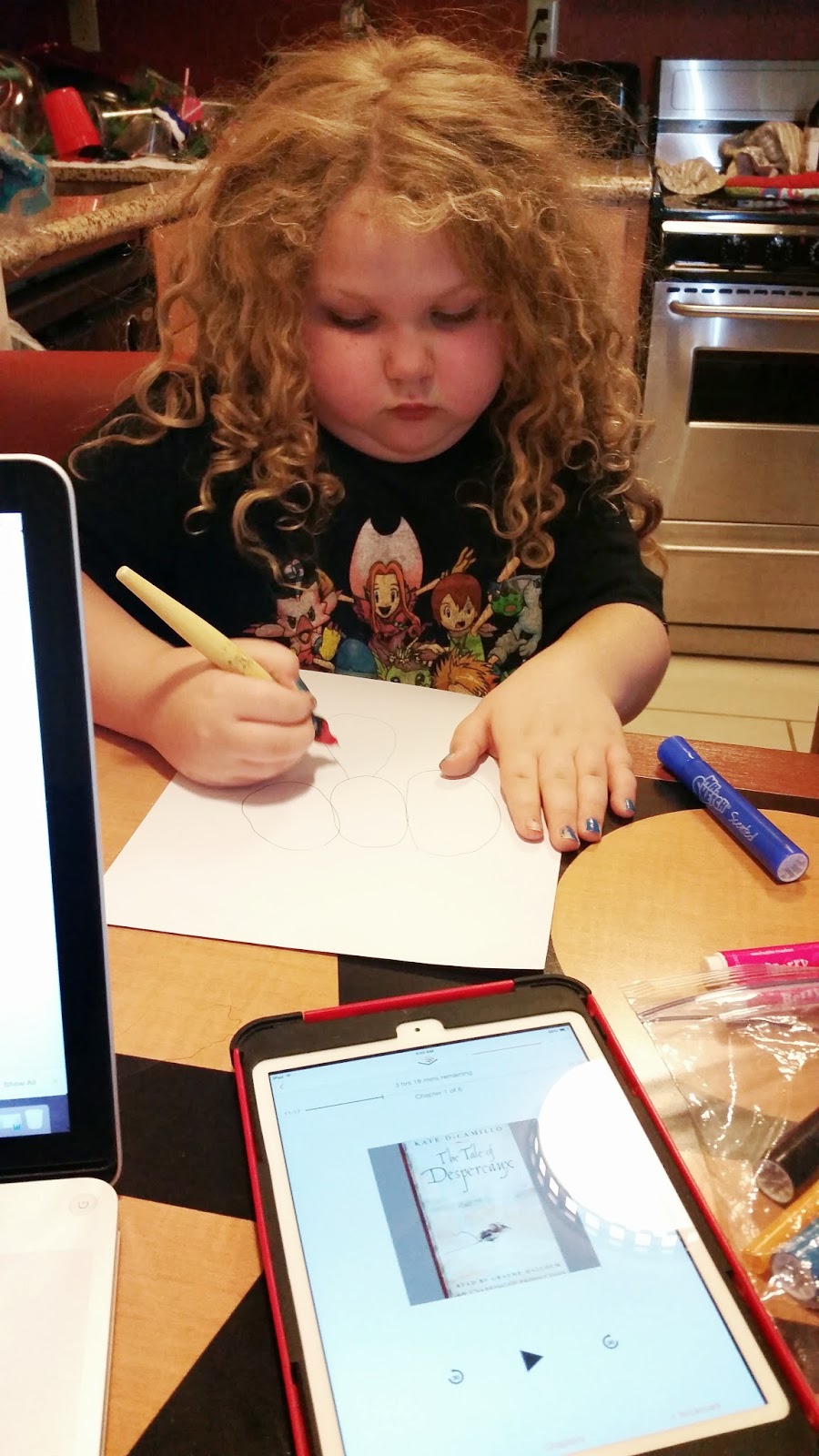 There was some braille in his video game, so Joey sat forever trying to translate it. 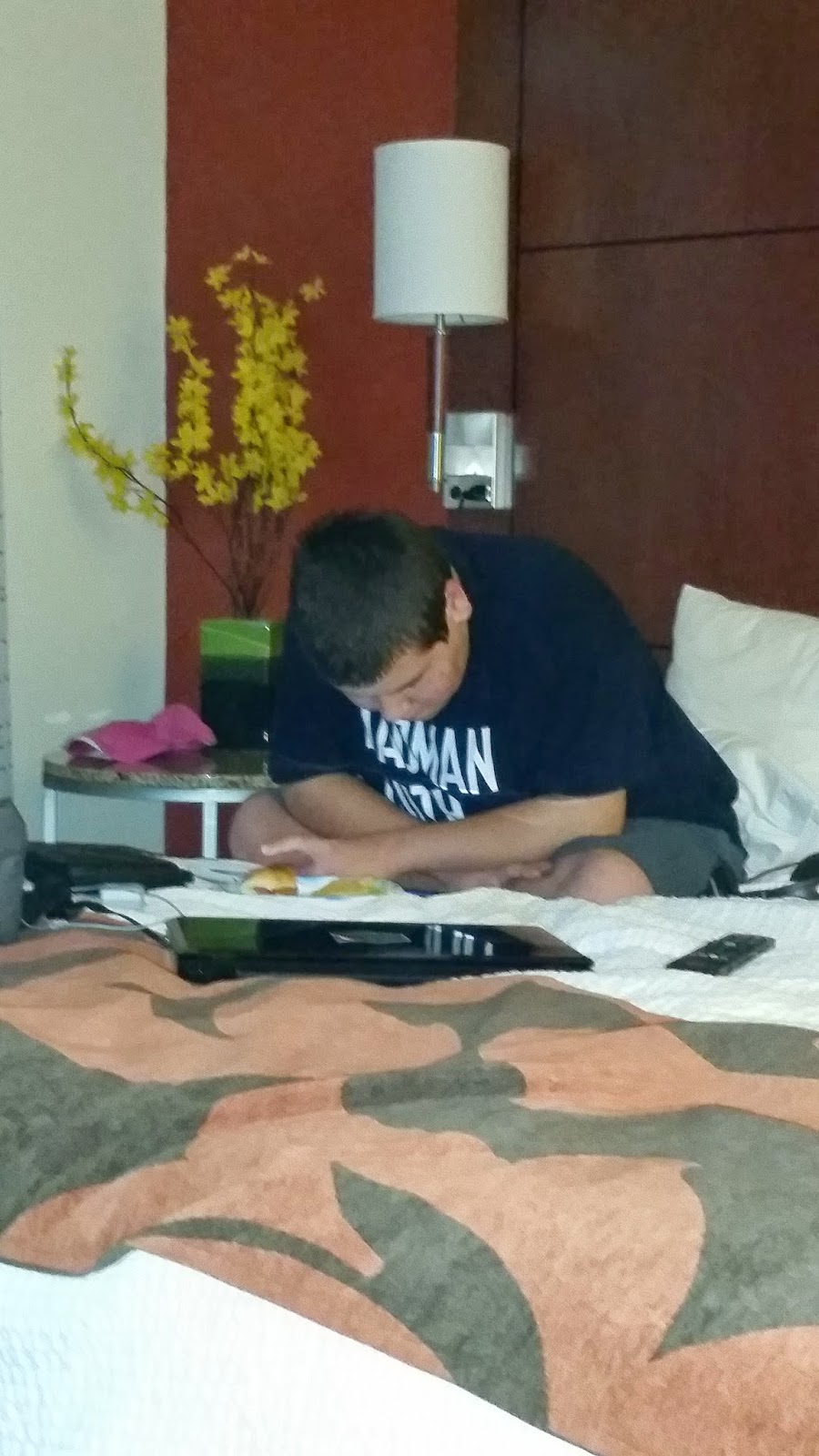 The kids had fun with the swimming pool this week, and I had fun relaxing in the hot tub.  We didn't explore in the city, other than visiting the local Barnes and Noble.  That was fine with us.  We stayed really busy.  We visited so much stuff in Madison the last time we were there, that we saw all the great stuff.

We had a nice week meeting new friends and spending the weekend taking it easy.  It was what we needed in order to get ready for the upcoming weekend adventure!!!  We are off to Oklahoma City now!!!

Posted by MommyKuehner at 4:22 PM