Why We Choose to Not Celebrate Halloween.

I am asked this question quite often.  People are caught off-guard by the fact that we have never celebrated Halloween with our children.  I try to explain our views, but people still think we are depriving our children of candy and fun.

So my question is, why do they choose to celebrate this holiday?  Through the years, I have heard many people tell me why they celebrate Halloween.  These are some of the things I have heard....

“We only take the kids door-to-door for the candy.”

“We never dress the kids in scary or evil costumes.”

“We are not Satanist, we are not celebrating it for what Halloween is meant to be.  It’s only candy.”

“I know it doesn’t have very good origins, but I don’t want my kids to miss out on this childhood tradition.”

Now to start out.... We are not the only ones who have made this decision.  Many millions throughout the world have made that decision, based on the history and origins of this holiday.

Halloween sales in the United States are expected to exceed $9.1 million.  An estimated 179 million people do celebrate this holiday and spend roughly $80.00 per person.  That alone means that money definitely talks when it comes to celebrating Halloween. 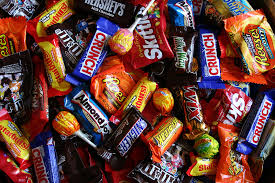 It might only seem like a holiday to get candy, but do you know the true origins of the traditions that are celebrated during Halloween?  I did some further research and I wanted to share with you the true origins, not from Bible experts, but from Historical accounts through the centuries.

The Encyclopedia of American Folklore says that, "Halloween is integrally related to the prospect of contact with spiritual forces, many of which threaten or frighten."  Many Halloween traditions have pagan origins and deeply rooted in ancestor worship.  Ghosts, goblins, seances....any of this sound familiar?

Halloween goes back centuries to the ancient Celts.  The Celts divided the year into two seasons.  There was the dark winter months and the light summer months.  On the full moon nearest to November 1, the Celts would celebrate the festival of Samhain, or Summers End.

Samhain marked the start of their new year.  The Celts believed that they needed to perform rituals to extend the amount of sun received.  This was considered a dying time of year as the weather changed.  Sacred bonfires were held to signify the new year starting.

The festival of Samhain was thought to be a time when the curtain between the human and spirit world allowed for spirits to roam the earth.  The souls of the dead were thought to return.  Families would put out food and drink for these ghostly visitors.  By giving these spirits a treat, they were hoping they would leave them alone (Trick or Treat...no one wanted the trick!)

On Samhain, whatever was previously forbidden, was then allowed.  Just during this time.  We still see this today.

The Catholic Church celebrated All Saints' Day as a feast to honor all the saints, known and unknown.  But by the end of the 2nd century, so-called Christians began to honor those who had been martyred for their faith and believing they were in heaven.  They even prayed to them.  In 610 C.E., Pope Boniface IV dedicated the Pantheon as the Roman temple of all the gods.

All Saints' Day started to be celebrated on November 1st under Pope Gregory III around 735 C.E.  Samhain was still a popular celebration among the Celts at this same time.  The Celts though were being Christianized throughout Great Britain.  The British church tried to take out the pagan customs the Celts continued to hang onto, some think that the move of All Saints' Day to November 1 was felt to help give the Celts a new celebration at the same time of year so that they would stop celebrating Samhain.

The church found it impossible to uproot the pagan beliefs from the hearts of its members, so the church decided to simply hide them behind a "Christian" mask.  The Encyclopedia of Religion says: "The Christian festival of the Feast of All Saints, commemorates the known and unknown saints of the Christian religion just as Samhain had acknowledged and paid tribute to the Celtic deities."  So instead of keeping worship pure to God, the Church allowed the Pagans to continue celebrating the traditions that they knew would not be approved by God.

The history of the holiday is steeped high in pagan traditions that have been shown as Christian.

What are the pagan origins of some of the popular Halloween traditions?

Costumes...The Celts wore frightening masks so that evil spirits would mistakenly think that the person wearing the mask were also spirits and leave them alone.  As the church began merging pagan customs into their celebrations, this tradition was carried over into the All Souls and All Saints feast.  As time went on, participants would go from house to house wearing costumes of saints, angels and devils.

Bobbing for apples... Apples or hazelnuts with special marks were thrown in a tub of water.  Whatever item you closed your eyes and pulled out with your teeth, foretold your future.

Candy...The ancient Celts tried to appease wicked spirits with sweets.  The church later encouraged participants to go from house to house on All Hallow's Eve, asking for food in return for a prayer for the dead.  This custom is what became trick-or-treating.

Jack-o-Lanterns....Carved, candlelit turnips were displayed to repel evil spirits.  To some, the candle in the turnip represented a soul trapped in purgatory.  Later, carved pumpkins were used as this holiday reached North America.  They discovered they had plenty of pumpkins.

Vampires, Werewolves, Witches, and Zombies.... These creatures have always been associated with the evil spirit world.

This all has influenced our thinking and allowed us to come to the decision that celebrating Halloween is something that we will not be doing.

Covering over traditions with sweet candy and treats only covers the surface.  It's like putting icing on a rotting cake.  It might be pretty on the outside, but when you cut into it .... it's a gross, rotting cake.  You would not eat that, so why celebrate a holiday steeped in spiritism, something that God hates.

I promise that our children are not deprived of any fun and definitely not candy.  But this is why we choose as a family to not celebrate Halloween.

This is also a special that History Channel aired about the History of Halloween.